A brief history of the energy intensity of desalination

Humankind has long been fascinated by the possibility of making seawater drinkable. The oceans that we have lived by, fished from, and traveled on for millennia provide an endless source of water. The problem is, we would die of dehydration if we drank it: we need freshwater to dilute salt and keep the salinity of our blood just right, and drinking salty water of any kind only makes us more thirsty.

It’s no wonder, then, that people have utilized whatever technologies were available to desalinate seawater. As far back as 340 BCE, Aristotle observed that “Saltwater, when it turns into vapor, becomes sweet and the vapor does not form saltwater again when it condenses.” This is the first known reference to what we now call seawater thermal distillation.

As we’ll see below, thermal distillation, though still used today, is just the first generation of technologies adapted and developed to desalinate water. In terms of energy intensity, much has happened since Aristotle walked the shores of ancient Greece.

Distillation is a phase separation method. Heat is added to seawater, so the water vaporizes; but the salt, which has a different boiling point, doesn’t. When this water in its gas phase returns to its liquid phase through condensation, all that’s left is pure H2O.

Generating the heat to boil seawater requires much more energy than drawing water from a well or stream or collecting rainwater. That’s why for most of human history, thermal distillation of seawater was only a last resort that took place at a small scale, as when ancient mariners boiled pots of seawater and used sponges to collect the condensed steam. However, after the industrial revolution, when oceangoing ships began to use steam for power, things started to change. Throughout the 1800s marine distillation became increasingly widespread and more energy-efficient through a series of inventions, including multiple-effect evaporators, that are still in use today.

Engineers made great strides in improving the energy efficiency of thermal distillation throughout the 20th century. As the graph below indicates, three technologies play a significant role in this development. Just how efficient a given thermal distillation desalination plant is will depend on when it was built (or retrofitted) and on the type of technology employed. 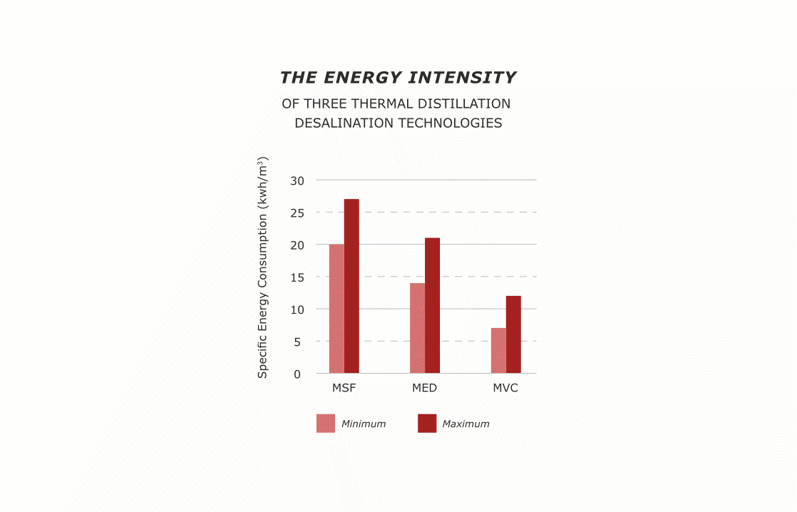 Graph based on Kumar, et al.

Multi-stage flash (MSF): Seawater is partially evaporated (flashed) in a sequence of stages, each with its own pressure and boiling point. MSF plants operate at approximately 20 – 27 kWh/m3.

Multiple-effect distillation (MED): MED plants also consist of a series of stages, or "effects." In MED plants, each effect contains steam-heated tubes to evaporate a portion of the feed water. More energy-efficient than MSF, MED plants operate at approximately 14 – 21 kWh/m3 of distilled water.

As seen above, the specific energy consumption of thermal distillation plants varies widely – from 7 – 27 kWh/m3, depending on the technology used.

The decrease in thermal distillation desalination energy intensity is impressive, with the most energy-efficient MVC plants using just a quarter of the energy required by the least energy-efficient MSF plants. But there was more to come. Reverse osmosis technology would soon usher in even greater energy savings.

People have filtered water in one way or another throughout history, but reverse osmosis (RO) is different. While filters separate even very tiny particles from water, they cannot remove dissolved chemicals. Reverse osmosis does this at the molecular level by using pressure to force seawater through a semi-permeable membrane, allowing the solvent molecules, H2O, to pass through the membrane but not the dissolved salt or other contaminants. Unlike thermal distillation, RO is a physical process that involves no phase change.

Two researchers at UCLA, Sidney Loeb and Srinivasa Sourirajan, developed the first RO membrane in 1959. Six years later, the first municipal water utility to use the technology began a successful pilot program in Coalinga, California. Ever since, RO has been on a one-way trajectory of growing worldwide adaptation and increased energy efficiency driven by improvements in membrane technology, energy recovery, and high-pressure pump efficiency.

As the graph below shows, the specific energy consumption (SEC) of RO membranes dropped precipitously in the late 1970s with the introduction of thin-film composite technology. Since then, innovation has reduced membranes’ SEC even further, to about one-tenth of the first generations of cellulose acetate membranes. The SEC of the today’s most energy efficient SWRO plants using the best RO membranes, less than 2 kWh/m3, is close to the thermodynamic limit of 1 kWh/m3. 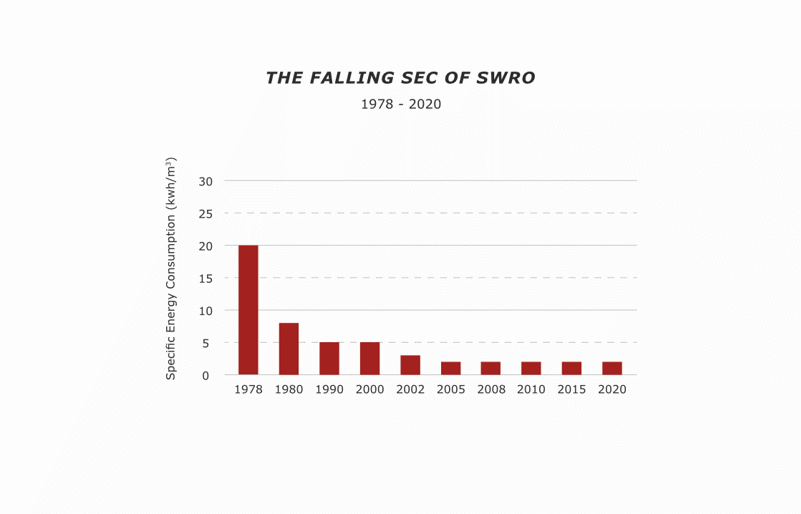 Graph based on Kumar et al.

The other main driver of RO energy consumption is the generation of the high pressure required to force seawater through the membranes. Here, both energy recovery devices (ERDs) and pump efficiency play important roles.

Before RO with isobaric energy recovery, engineers employed several other methods to re-use the pressure remaining in the concentrate (brine) by transferring the hydraulic energy to the feed side of the membranes. These include:

Generally speaking, SWRO before the introduction of isobaric energy recovery had a specific energy consumption of 3 - 5 kWh/m3  when Pelton turbines are used, and up to 8 kWh/m3 with Francis turbines – still a significant reduction compared to thermal distillation.

The energy intensity of desalination 3.0: RO with isobaric energy recovery

The invention of isobaric energy recovery devices was another giant leap in making desalination more energy efficient. Although the first patent filings for isobaric ERD took place in the mid-1960s, it would take decades more of innovation until they started appearing in SWRO plants and became commercially successful.

Isobaric ERDs reduce the amount of flow that high-pressure pumps need to pump, enabling dramatically lower power consumption throughout the SWRO plant. Unlike their centrifugal predecessors, isobaric ERDs use positive displacement technology to reach unprecedented energy recovery efficiency – up to 98% – making SWRO plants using them 10 – 30% more efficient than plants using turbines or turbochargers and up to 60% more energy-efficient than plants without ERD.

Despite their capital cost, need for a booster pump, and issues with mixing and leaking, isobaric ERDs have been a standard component in energy-efficient SWRO plants since around 2005 - 2006. Similarly, the business case for retrofitting SWRO plants without ERD is often strong. Today, many SWRO plants built before 2005 achieve significantly lower operating costs and attractive payback times by replacing these with isobaric ERDs.

Another innovation in SWRO is axial piston high-pressure pumps, which are more energy-efficient than centrifugal high-pressure pumps. As shown in the chart below, this efficiency difference is most significant in small and medium-sized installations. The efficiency of axial piston pumps is about 20% greater than centrifugal pumps in 500 m3/d plants, but this efficiency difference falls to 4% in 10,000 m3/d plants. 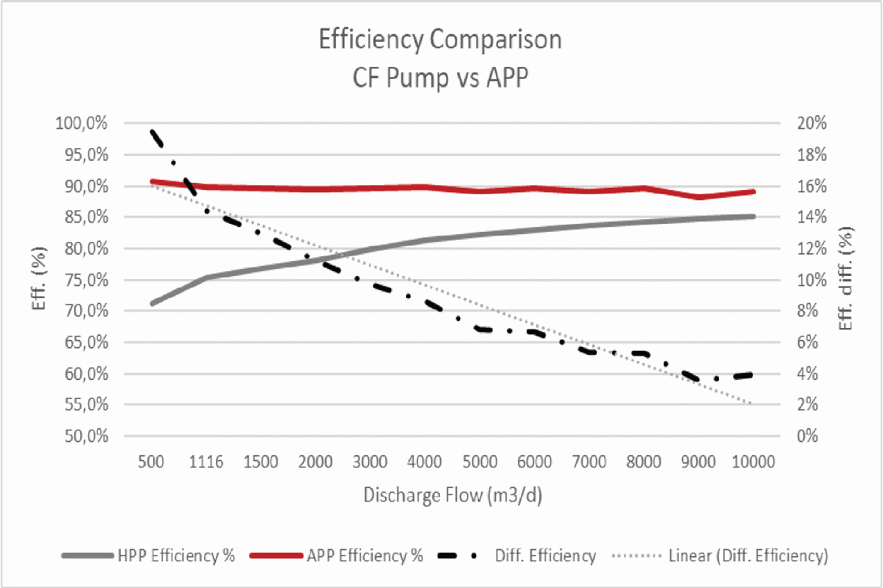 In terms of specific energy consumption, the current "state of the art" for SWRO plants using isobaric ERDs, axial piston high-pressure pumps, and the latest membrane technology can now be lower than 2 kWh/m3, or less than half of what it was at the turn of the 21st century.

The energy intensity of desalination 4.0: What’s coming next?

Will the next generation of desalination technology also reduce energy consumption by half – or more? When will incremental SEC improvements in high-efficiency SWRO technologies reach the point of diminishing returns, and open the door for the next game-changing breakthroughs?  It’s too early to tell, but many interesting technologies will most likely reduce the energy consumption and the carbon footprint of desalinated water even further. Here are just a few innovations we might be seeing more of soon:

The combined effects of demographic growth, climate change, and water scarcity will almost certainly increase future demand for desalinated water. However, for desalination to be part of the solution – instead of adding to the problem by increasing CO2 emissions as it increases water output – more innovation will be needed.