Understanding the cost drivers of SWRO

Seawater reverse osmosis (SWRO) is growing worldwide to bridge the gap between increased demand and climate-driven water scarcity. However, compared to other sources such as ground and surface water, fresh water from SWRO is relatively expensive.

SWRO costs vary widely depending on many factors. While many of these costs are determined by the size and location of the plant, it is possible to reduce electricity costs – a very significant cost driver for SWRO – by designing plants that run as energy-efficiently as possible.

Of course, SWRO will not be an obvious option for populations that live far from the sea. At least not in low-income countries. But since more and more communities will use SWRO for some or all of their water needs, understanding the cost drivers of SWRO is essential to making economically sound decisions.

SWRO is not a standardized, off-the-shelf solution. A range of variables influence its cost structure regarding both capital expenditures (CAPEX) for procuring the plant and ongoing operational expenditures (OPEX) for maintaining and running the plant throughout its lifetime.

Many SWRO costs vary relative to the location of the plant and the nature of the seawater near that location. Both variables can affect CAPEX and OPEX. While these are not “fixed costs” in accounting terms, and all are subject to negotiation, these costs are largely determined by where in the world the plant will be built and afford little “wriggle room” for optimization. Such costs include:

In addition to the variables above, some cost drivers depend more on design choices than location. These include:

The elements of SWRO CAPEX

As demonstrated in the chart below, total CAPEX costs comprise a wide range of components. 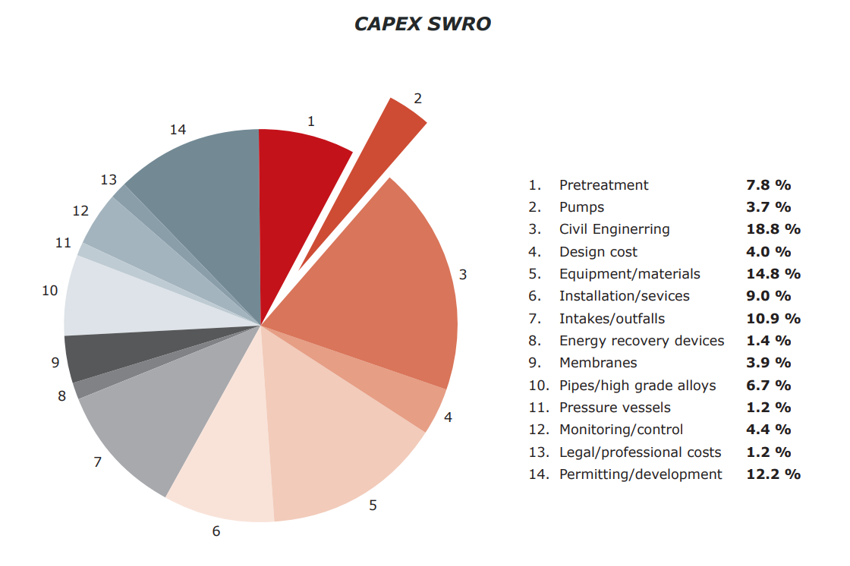 Civil engineering (19%) and equipment/materials (15%) represent the largest shares of CAPEX followed by intakes/outfalls (11%) and permitting and development (11%).

As noted, while there is some potential to optimize CAPEX costs, the size and the location of the plant will significantly limit the range of such optimizations. As we’ll discuss below, however, there are two CAPEX decisions that can have significant consequences for a plant’s OPEX and total lifetime costs. 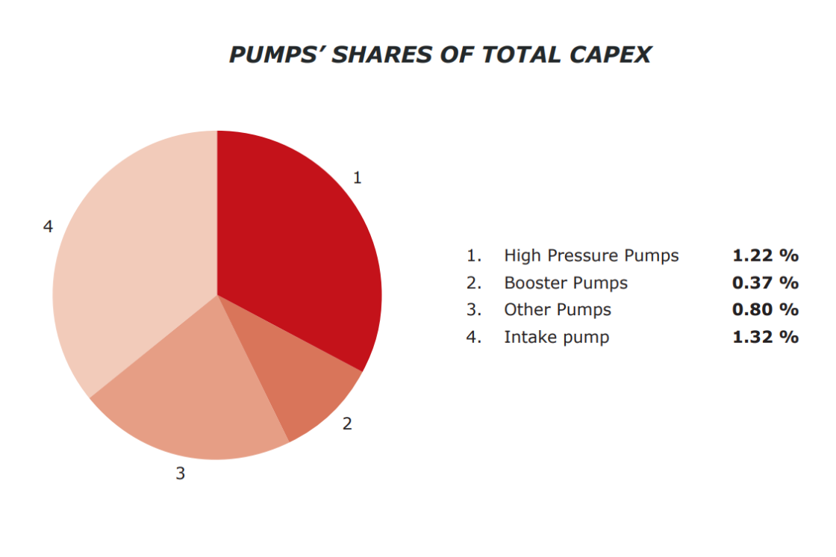 The elements of SWRO OPEX

OPEX comprises a range of cost categories. Although all of these depend on actual plant output and running hours over time, some are more “variable” than others. 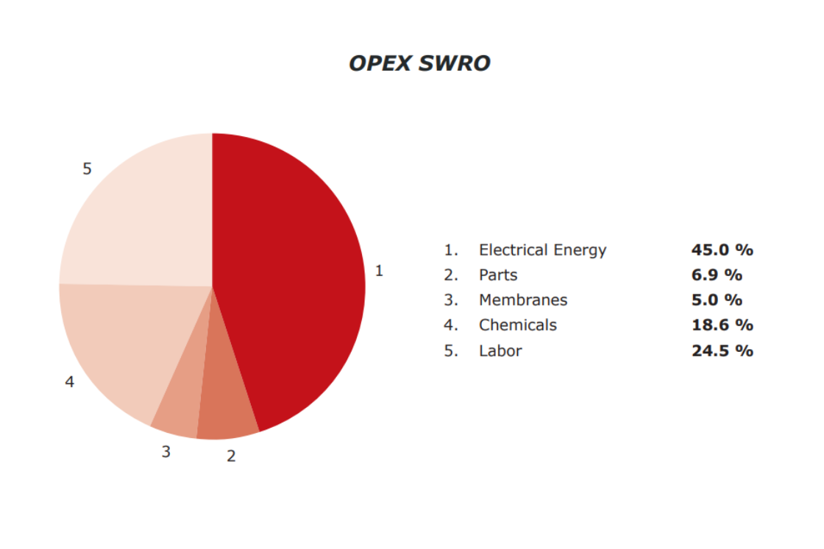 Along with chemicals, replenishments such as spare parts and membranes can be presumed to cost roughly the same no matter where in the world the plant is located. Labor costs, on the other hand, will differ depending on whether the plant is located in a high-, middle- or low-income country.

This leaves energy, by far the largest OPEX cost driver. While out of pocket energy costs vary widely by country, we estimate that electrical energy costs make up at least 45% of total operating costs on average.

Unlike most OPEX and CAPEX elements there is significant “wriggle room” within energy consumption to reduce overall costs significantly. The keys to these OPEX savings lie in CAPEX decisions concerning ERDs and high-pressure pumps:

Looking beyond CAPEX and OPEX to total cost of ownership

As illogical as it might seem, not all SWRO plants are optimized to save costs where they can. This is especially true for energy costs.

In some cases, this is because plants were built before the time when isobaric ERDs and high-efficiency high-pressure pumps were as readily available as they are now. The business case for retrofitting such older plants to make them more energy-efficient is often compelling but must be decided on the basis of individual cost-benefit and payback time analyses. Read our blog to see just how much energy and CO2 emissions the world could save if all SWRO plants were retrofitted to be as efficient as is currently possible.

In other cases, a narrow focus on CAPEX to the exclusion of OPEX results in procurement decisions that favor the lowest price today without considering operational costs tomorrow and for the rest of the plant’s lifetime.

The only real solution to such suboptimization is the application of total cost of ownership principles. But that’s the subject of another blog.