However, this fresh water comes at a cost: no other source of drinking water is as energy intensive as that derived from SWRO. When the alternative is no water, those able to pay have gladly done so, while those unable to pay have gone without. Until now, SWRO’s economic and environmental costs have largely been acceptable, especially given its steady decline in energy intensity. But SWRO’s growing use and carbon footprint have raised important questions about its long-term environmental sustainability.

Fortunately for those who depend on SWRO for water – and for all of us who depend on a sustainable environment – as reliance on SWRO increases, so does the availability and affordability of renewable energy.

As the International Renewable Energy Agency’s (IRENA) graph shows below, all solar and wind energy costs have decreased significantly over the last decade, with the costs of solar photovoltaic and concentrating solar power falling most. 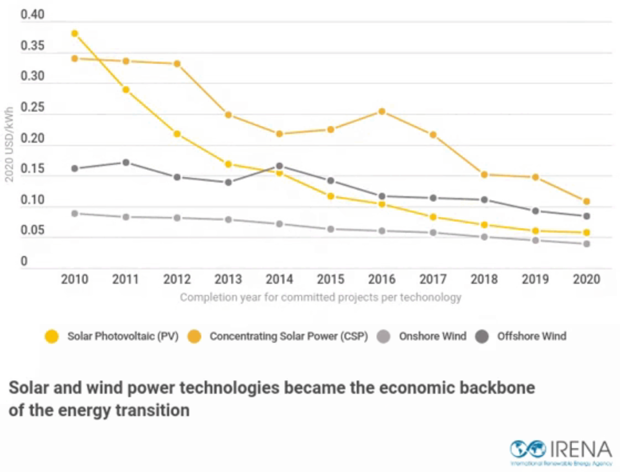 According to IRENA, renewables are now the least expensive source of electricity. Building new power plants based on renewables is currently cheaper than building new coal-fired plants, and new renewable plants now have lower operating costs than existing coal-fired plants. As we will see below, this trend will continue drive down use of fossil fuels and drive up use of renewables for power generation.

The steep drop in renewable energy prices has profound consequences for SWRO’s affordability. Since energy is by far the biggest cost driver of SWRO, more affordable energy will make SWRO increasingly accessible to many coastal developing countries – precisely those most impacted by the double punch of water scarcity and climate change. As it happens, many of these countries also have favorable conditions for generating solar and wind energy.

Renewable energy’s falling costs and growing use will also lower SWRO’s greenhouse gas (GHG) emissions. As discussed in our blog, How much energy and CO₂ can be saved by retrofitting existing desalination plants?, the world’s more than 22,000 desalination plants currently consume an estimated 340tWh of electricity and emit 153 metric tons of CO2 annually. According to our calculations, it would save a lot of money (€34.5 billion) and a lot of GHG emissions (111 metric tons) if all desalination plants operated as energy-efficiently as the current best in class, 2.0 kWh/m3.

Such savings are possible but unlikely to happen any time soon. Even though retrofitting many older plants would indeed be good investments with attractive payback times, the CAPEX costs of replacing the entire installed base of desalination plants would be prohibitive.

What is more likely to happen is that new desalination plants will increasingly be high-efficiency SWRO plants rather than less efficient, older alternatives such as thermal distillation and earlier generations of SWRO technology. In tandem with renewable energy’s growing share of the world’s electrical power, high-efficiency SWRO will reduce desalination’s overall carbon footprint over time.

This is the first way that renewable energy will reduce SWRO’s footprint: as more grids source more power from renewable sources, increasingly efficient SWRO plants that are fully reliant on the grid will progressively reduce their consumption of fossil fuels and produce less GHG. This process is gradual but significant, and is already underway.

Graph from the International Energy Agency

The second way that renewables will reduce SWRO’s carbon footprint is more direct. A growing number of SWRO plants are now powered in part or in total by renewable energy sources. Precise information on how many plants and the degree to which renewables power them is not currently available, but renewables are already fully powering small plants, and partially powering medium and large plants. This trend will also continue to grow in coming years.

Small SWRO plants with no connection to power grids are the best example of this trend. Danfoss has supplied high-efficiency high-pressure pumps and ERDs to some of these, including one in the Aegean Sea that won an award in 2017 for its innovative off-the-grid design. Because these projects are small, they often fall under the radar and are difficult to track, even for those who do it professionally. However, we estimate that there might already be several hundred off-the-grid SWRO plants currently in operation, primarily in remote island locations and Africa. Surely, the future will bring more of these.

In addition to these small plants that are completely off-the-grid, many other small and medium-sized plants get at least some of their power from solar photovoltaic or wind energy. Some of these plants use renewable energy sources because they must: their power grids are either too unreliable or too expensive for their owners and operators to depend on 100%; others could rely on the grid but turn to renewables to reduce energy costs and carbon footprint.

Finally, a growing number of large plants, not least in GCC countries, now use solar energy as part of their power supply. This includes the world’s largest SWRO plant, Taweelah, which will supply Abu Dhabi with 909,200 m3/day fresh water when fully operative by the end of 2022. The Taweelah project includes a 68 MW photovoltaic power plant to supplement power from the grid.

The future of SWRO will be more renewable

Although SWRO’s environmental impact is still significant, technological advances within the SWRO and renewable energy industries have already resulted in important improvements. This trend will continue in the future, and we will also see some exciting new developments.

For example, in Greece engineers are testing wave power as a renewable energy source for SWRO. And in Namibia, concrete plans for a massive project are on the drawing board to use renewable energy to desalinate seawater to produce green hydrogen. As the world transitions to net-zero, such “power-to-X” projects, which convert and store renewables’ fluctuating energy in more reliable and retrievable forms, attest to SWRO’s potential to be not just part of the problem, but part of the solution.

Do you want to stay up-to-date?

Read our latest news to stay up-to-date with latest developments of our products and solutions.
Subscribe to our eNewsletter and receive news and articles in your email inbox.

Follow us to stay up with the latest high news, updates, announcements, and resources from High Pressure Pumps. Of course, we want to hear from you too - so jump in and join the conversation.