People everywhere need fresh water, but for many, access to clean water is increasingly problematic. In this blog, we discuss why growing water demand and water scarcity will make desalination an even more vital source of fresh water in the future.

Our thirst for water has never been greater than it is now – and will only increase in the foreseeable future.

According to the United Nations World Water Development Report 2018, humankind now uses about six times as much water as we did 100 years ago, and our water usage will continue to grow at a rate of about 1% annually. Moreover, the same report reveals that what has driven increasing water consumption in the past will also drive future growth: growing population, greater economic development, and evolving consumption patterns.

The OECD estimates that global water demand will increase from about four trillion cubic meters in 2014 to six trillion in 2050. Against this backdrop of rapidly growing demand, the planet’s overall supply of fresh water remains relatively stable. In hydrological terms, our Earth has the fresh water it has, and still has plenty of it – whether in underground aquifers, lakes and rivers, or glaciers and ice caps. The problem is, naturally occurring water cycles do not necessarily replenish fresh water supplies where and when large and growing human populations need them.

We no longer live nearby the clean, fresh water we need

For most of human history, the size of our settlements depended directly on the availability of drinking water nearby. We got our water from rivers, springs, and shallow wells ­– and we lived near them. As our technologies developed, however, and we transitioned from hunter-gatherer to agricultural economies, so did our water management systems and our ability to transfer lifegiving water.

Much has changed since the first known irrigation systems were introduced in Egypt in 6,000 BCE. Although very few of us now live within walking distance to good water in a local spring or even have any idea where our water even comes from, according to the WHO, 71% of us now have access to safely managed water. The other 29% of us, 2.2 billion people, do not.

However, even those with easy access to fresh water now may not have it in the future. Many who turn on the tap for decent water live in areas whose local fresh water supplies cannot sustainably support them. Below are just a few examples:

We could go on, but you get the picture: Human population and water withdrawals continue to grow – also in regions without enough natural water replenishment to secure supply. In many of these places, water availability has already declined to alarming levels and will continue to fall. As we’ll see below, water scarcity is an escalating worldwide challenge and will be further exacerbated by climate change.

As shown in the image from The Water Scarcity Atlas, water scarcity is a global phenomenon that affects high-, middle-, and low-income countries alike. However, its impact is felt most acutely by the poor. 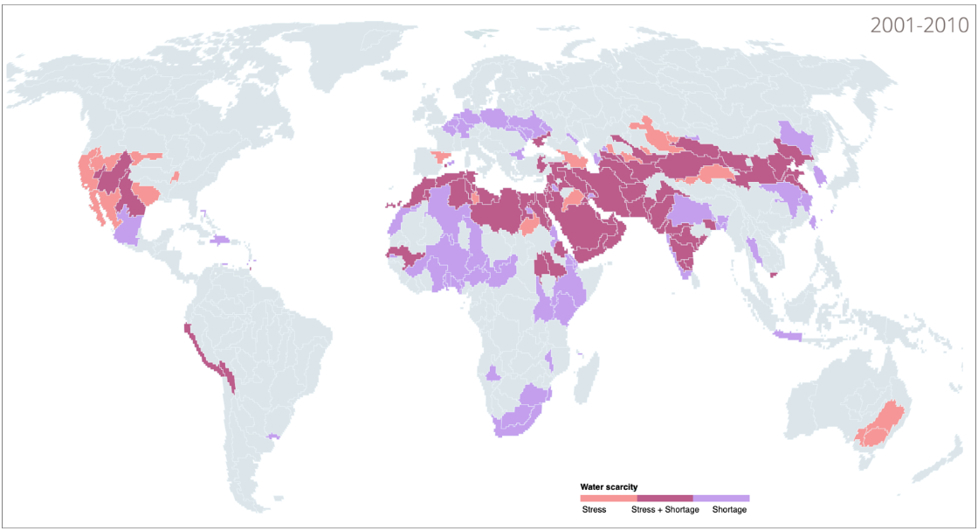 Water scarcity is widely recognized as one of the biggest threats facing humanity, and the threat is growing. According to UNICEF,

In addition to increased demand, several other factors contribute to water scarcity. One of these is droughts, where persistent rainfall deficiency reduces average water availability. Droughts are nothing new and have changed the course of human history, leading to famine, massive displacement, and conflict. However, the duration, intensity, and frequency of droughts have increased worldwide over the last several decades and are projected to worsen in the future due to climate change.

Paradoxically, another contributor to water scarcity is floods. Caused by extreme weather events, flooding creates clean water scarcity when hazardous waste sites, sewers, and agricultural and livestock facilities overflow and pollutants are dumped into human water supplies, making them unpotable. Again, the growing frequency and severity of floods is related to global warming: floods in the tropics have increased 400% since the 2000s and 250% in the north midlatitudes.

Finally, let’s not forget water infrastructure and management – or lack thereof. In both low-, middle- and high-income countries, poor management of available water accounts for massive waste of this precious resource. Better water and wastewater management must play a significant role in reducing water scarcity and mitigating its impact. Delhi, which faces severe water shortages, scored at the bottom of an Indian index of water management performance, the lowest of India’s 26 states. American households waste an estimated one trillion gallons of water annually due to dripping faucets, running toilets, and other faulty plumbing. Another two trillion gallons go missing every year from leaks in America’s municipal water pipes.

Given the growing demand for water that outstrips supply, the mismatch between water availability and population concentration, and increasing water scarcity worldwide, it would be easy to conclude that things are bad enough. Unfortunately, things will most likely get even worse, and climate change is why.

According to the United Nations, “Climate change impacts are most felt through changing hydrological conditions including changes in snow and ice dynamics.”

Weather patterns worldwide will change. Rising sea levels caused by global warming will increase seawater intrusion in coastal areas, where about 40% of the world’s population lives, impacting aquifers and rivers that people depend on for water. Major river basins that are home to billions and depend on glacial runoff and snowmelt will also be affected.

As we pointed out in a previous blog, desalination currently accounts for just one percent of global water consumption, but this share is projected to expand. There are at least three reasons to expect that desalination will play an increasingly important role, especially in areas with high water demand and high water scarcity:

Desalination is only part of the solution

Desalination is clearly not a panacea to global water scarcity.

Water conservation and improved water infrastructure and management must be improved as thirsty populations come to terms with water scarcity and learn to make the most of available water resources. Efforts to combat climate change must be redoubled. In many cases, distance from the sea and cost will be prohibitive.

Nonetheless, future populations will increasingly rely on desalination to meet their demands for fresh water.