Aquaculture is an increasingly significant source of protein for a hungry world, and farmed salmon is now a nutritious and popular choice for millions of consumers worldwide. Seawater reverse osmosis (SWRO) plays an innovative and important role in keeping salmon raised in marine aquaculture parasite-free through freshwater treatment on specially built wellboats.

As the global population grows in number and wealth, we continue to add more animal protein to our diets. In fact, the global per capita supply of animal protein has more than doubled since 1960. Seafood leads the trend: fish is the fastest growing animal-based food group, and we’re eating more of it than ever before.

Increasingly, however, the fish we eat is farmed, not wild. As you can see in the graph below, the supply of wild-caught fish is stagnating while that of farmed fish continues to grow. In 2020, the world harvested 86 million tons of fish for direct human consumption and caught 76 million tons of wild fish. 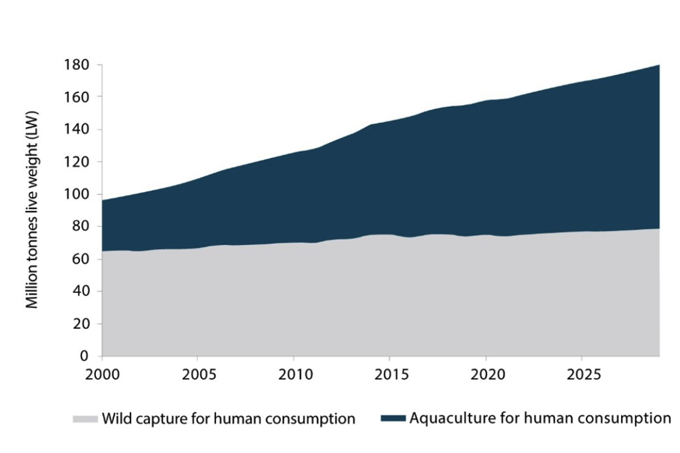 Farm-raised salmon is a popular choice for millions

Aquaculture plays an important role in explaining salmon’s worldwide availability and popularity. Today, people around the world eat five times more farmed salmon than wild. The Atlantic salmon is the most farmed salmonid, but steelhead trout, cohos, and chinooks are also raised. Because salmon farms depend on cold water for productivity and profitability, most are found in countries such as Norway, Scotland, Canada, and Chile.

Tiny sea lice are a big problem for farmed salmon

Farmed salmon are usually raised in open-net pens in coastal areas. The free flow of seawater through the nets ensures a constantly replenished natural environment for the fish, but also allows parasites to enter the cages. One of these parasites is particularly harmful to farm-raised salmon.

Lepeophtheirus salmonis is a parasitic sea louse whose larvae feed on salmon skin, mucous, and blood. Less than one millimeter long, the tiny larvae do find hosts in the wild, but salmon farms provide high fish densities that are far more susceptible to infestation. 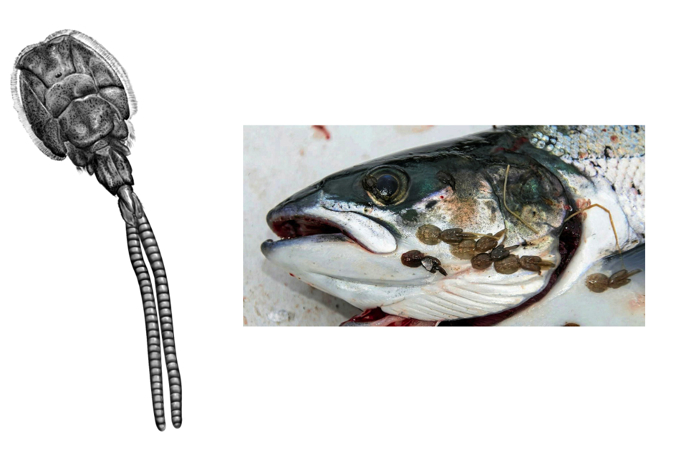 Sea lice are highly problematic for salmon farmers. Infected salmon cannot be sold; their health deteriorates, and severe infestations can lead to mass mortality. In addition, the high concentrations of sea lice made possible by thousands of salmon in open pens put wild fish populations near farms at a higher risk. Delousing infected salmon is thus an ongoing challenge for farmers.

Delousing salmon: How to solve one problem without creating another?

Farmed salmon is a big business – and so is salmon delousing. In Norway alone, where salmon exports totaled more than €7 billion in 2019, salmon farmers spent an estimated €500 million fighting lice in 2018.

While effective in delousing farmed fish, chemical treatments result in other problems. For one thing, chemically treated salmon cannot be eaten or sold for weeks after treatment. Even more critically, the chemicals kill organisms other than sea lice: unintended toxicity to non-target species is a major environmental concern. Finally, there is a real risk that sea lice will genetically adapt to the chemicals. Farmers have thus had good reason to experiment with a variety of non-chemical delousing methods.

Trials with everything from lasers to cleaner fish have narrowed the search for more sustainable lice treatment to three mechanical methods. One of these, thermal treatment, kills lice by briefly transferring salmon to tanks with seawater heated to 28-34 C. While effective against lice, thermal treatments are associated with fish injury and mortality. Another mechanical delousing technology is flushing salmon with low-pressure water jets; again, this is effective against lice but can result in scale loss, gill bleeding, and other wounds to the fish.

Freshwater treatment is an innovative, gentle approach to delousing

The third mechanical delousing technique is freshwater treatment. To remove lice, salmon from open net-pens are temporarily pumped into wellboats filled with fresh water. Sea lice are sensitive to seawater salinity and cannot survive in fresh water. By comparison, infected wild salmon typically shed any lice when they return to streams to spawn. Freshwater treatment has no harmful impact on either salmon or non-target species. However, to ensure that the lice do not genetically adapt, freshwater treatments must be carefully controlled and monitored.

This innovative method is effective and efficient but requires large volumes of fresh water which may not be readily available near open-net pens at sea. To avoid hours-long trips to coastal sources of fresh water in sufficient volumes, some salmon farmers have recently begun to utilize purpose-built wellboats equipped with tanks and seawater reverse osmosis (SWRO) plants. The number of wellboats equipped for SWRO freshwater treatment is so far limited, but we can expect to see more of them in the future.

Of course, energy efficiency is a priority for any SWRO plant. However, in a marine application such as a wellboat, where all electricity is generated by diesel fuel, it is even more important to specify a design and components that enable the lowest possible specific energy consumption.

Similarly, reliability and ease of maintenance are always important. But when a vessel is at sea for much of the year, the greater the dependability and the longer the service intervals, the better.

Finally, space onboard a vessel is at a premium. Therefore, compact SWRO plants with optimal footprint-output ratios are preferred.