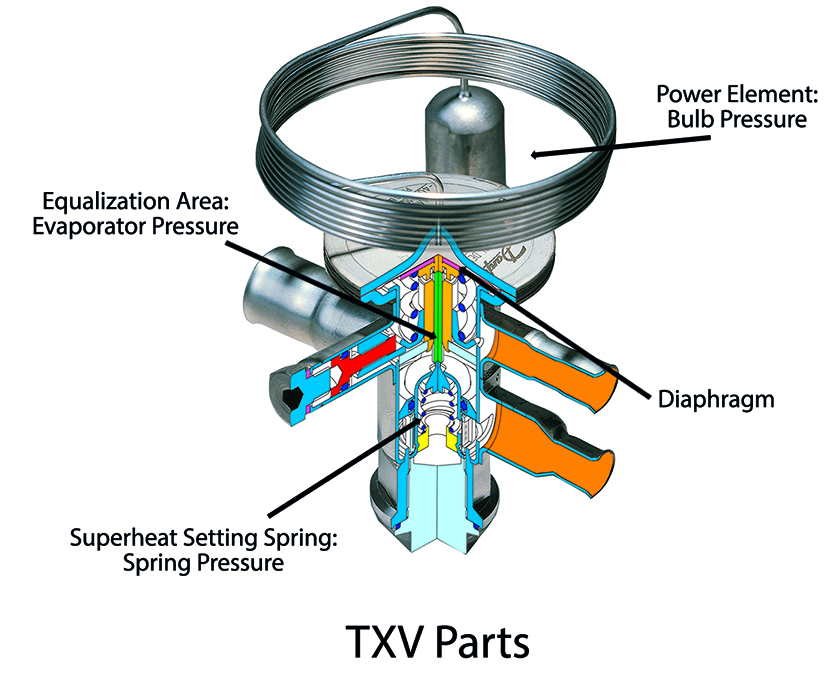 The basic parts of a TXV are the sensing bulb, the diaphragm, the equalization area, and the superheat setting spring, which work against each other to control the valves operation. First, the sensing bulb, which is filled with a special, fluid corresponding to the specific refrigerant used, is mounted on the suction pipe on the downstream side of the evaporator; as the temperature of refrigerant rises, it causes the sensing bulb fluid to expand driving the diaphragm down. Next, the superheat setting spring pushes back, creating constant pressure. Finally, the evaporator pressure in the equalization area varies according to different operating conditions such as refrigerant temperature, ambient temperature, and bulb and spring pressures. Based on the balance created by these three pressures, the valve will open or close and ensuring that a stable superheat is maintained even when there are varying ambient conditions.

Solenoid valves are a style of regulating valve which use electromagnets to open or close. Valves come either normally open (NO) or normally closed (NC), depending on the needs of the system. Each solenoid is equipped with a coil containing the electromagnet, which controls an internal armature assembly. For example, in a NO solenoid, when the valve is activated, it drives the armature assembly down, closing the valve. 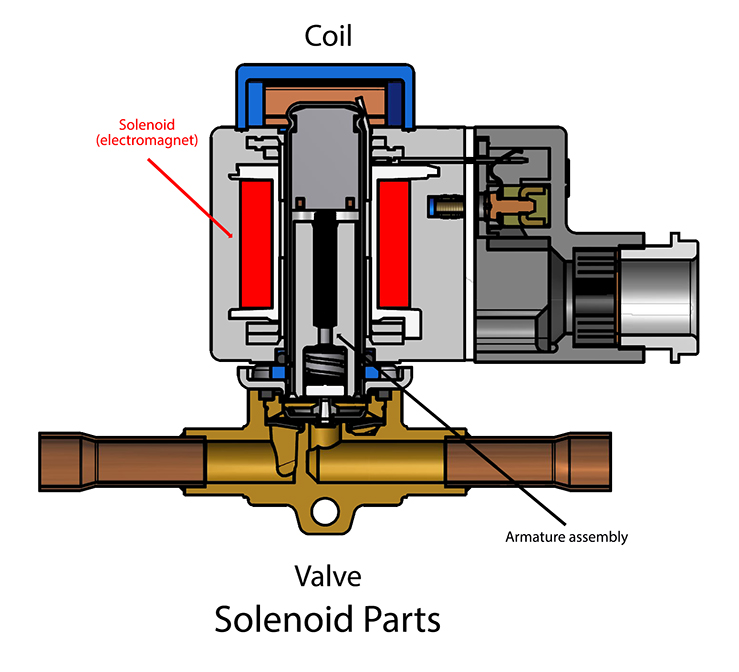 Solenoid valves can be used to redirect the refrigerant (closing an NO valve or opening an NC valve) and are often operated using a controller, though most can also be operated manually. Solenoids work well for a multitude of walk-in cooler or freezer applications, including hot gas defrost and humidity control.

Initiating a hot gas defrost is ideal right after loading. When warm product is put into the walk-in, the thermostat senses the rise in temperature and turns the compressor on, starting the refrigeration cycle. If the cycle runs long enough, the evaporator may begin to ice over. When the hot gas from the condenser cycle back through the evaporator a second time, it melts any ice that may have formed.

As we have seen throughout this series, each component can have a major impact on the operation of the refrigeration cycle and these valves are no exception. These two small valves have the power to affect the rest of the walk-in in major ways, so choosing the ones that work best for the specific needs of the walk-in is vital.