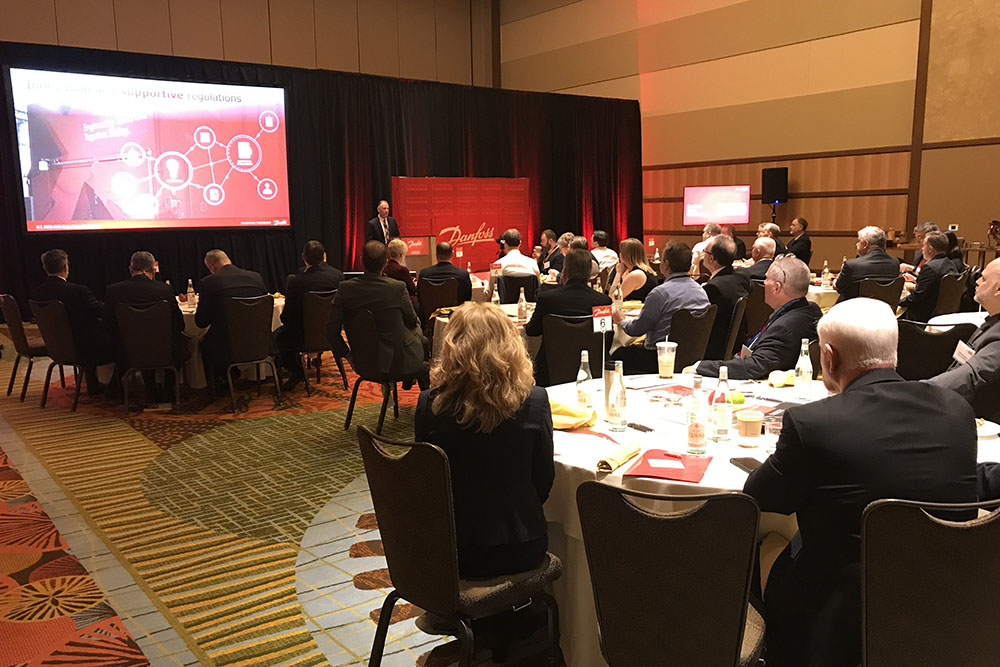 During the 2020 AHR Expo in Orlando, Florida, Danfoss convened a briefing for members of the HVACR trade press to provide an update on the company’s business and the evolving regulatory landscape affecting industry, as well as take a deeper dive into the impact of trends like electrification and district energy and the available technologies and solutions. This was the 25th year the company has hosted the event.

“There are three major trends that are—or will—impact our business,” John Galyen, president of Danfoss North America, stated in his opening remarks. “While not a new trend, energy efficiency is the biggest contributor in reducing global warming, especially in the short term. It is the low-hanging fruit, and we continue to invest in technologies and innovation to support our customers and industry in meeting this challenge.”

“We are now also facing a global patchwork of refrigerants that will vary by application. The conversion to low-GWP refrigerants will vary by region, country, and even state. And some of the new refrigerants are flammable. What’s most important is that we make a safe transition, respecting design, development, and test cycles—and considering the needs of our distributor and contractor partners.”

“Electrification and decarbonization has been a prominent topic within the transportation sector, but we are seeing a trend to reduce the fossil-fuel combustion for heating in buildings and continued investment in renewable energy sources like wind and solar. In addition, some cities and states are considering a ban on fossil fuels in new construction—resulting in increasing interest in heat pump technology,” Galyen continued.

John Sheff, director of public affairs at Danfoss, addressed the current state of policy in the US, including the withdrawal from the Paris Climate Accord and inaction on the Kigali Amendment, in light of increasingly dire climate news. And while leadership on climate is missing from the federal government but is expediting on the state and local level, he emphasized that it is imperative industry and policymakers seek a safe transition to low-GWP refrigerants that considers manufacturers’ needs and code cycles in order to ensure consumers are not left without feasible solutions as soon as 2023.

“Right now the refrigerant transition is disorderly and inefficient—with no economic benefits,” Sheff suggested. But “the American Innovation in Manufacturing Act [introduced in the US Senate in late 2019] would provide the industry a federal framework for an orderly phasedown.”

Looking more closely at the increasing interest in electrification and heat pump technology, Drew Turner, global marketing manager for oil-free solutions at Danfoss, first considered the move away from inefficient fossil fuels that drive harmful emissions. Heat pumps, he suggested, are not only more efficient—and become more efficient at part-load conditions, but also help to reduce operating costs by about 35 percent and emissions by about 60 percent.

“Importantly,” Turner said, “the use of heat pumps further drives greenhouse gas emissions reductions when grid integration of renewable energy grows. And according to recent data from the EIA, 76 percent of new US power generation capacity in 2020 will be from renewable sources.”

He then introduced the new Danfoss Turbocor® TTH/TGH high lift compressor as an optimal solution for heat pump applications due to its high lift capabilities combined with the oil-free magnetic bearing technology that makes Danfoss Turbocor® compressors exceptional for low energy consumption and high performance at part-load conditions.

Timothy Blanch of Washington, DC-based firm S.C. Herman & Associates, then presented a case study of an office building at 1120 Vermont Ave., NW, Washington, DC. The 12-story building boasts 502,000 real square feet, and is occupied largely by GSA tenants, which for leasing requires the building maintain at least a 75th percentile ENERGY STAR rating. Efficiency upgrades are also driven city-wide by the DC CleanEnergy Act—the most aggressive clean energy program in the US, which targets 100% renewables by 2032, zero emission vehicles by 2045, and net-zero building codes beginning in 2026.

Broadening out to efficiency at the campus level, Richard Hatcher, head of sales – Americas for Danfoss Heating, introduced the viability of district energy in the North American market through the implementation of Energy Transfer Stations (ETS), which Danfoss has been engineering and implementing elsewhere in the world for decades.

“We are building on our extensive history with district energy around the world and bringing the North American market ETS units that are factory designed and installed—enabling us to uniquely ensure system uptime and performance, while also easily facilitating code compliance, efficiency optimization, startup and commissioning,” Hatcher said.

This point was underscored by Herbert Sinnock, director, sustainability, at Sheridan College near Toronto, Ontario, Canada. He addressed the press conference to present the realities and benefits of Danfoss Energy Transfer Stations he deployed last year as part of an upgrade from steam to hot water in the campus district energy system. He cited hands-on manufacturer support, reliable operation and uptime through easy installation of the pre-engineered station, and a 20 percent reduction in natural gas consumption as core drivers of his support for the technology.

“To meet the challenges ahead, we will need supportive regulation—whether from federal, state, or city governments—to collectively realize the full potential of energy efficiency and CO2 emissions reductions, especially in our buildings which represent 40 percent of total energy use in the US today,” Galyen concluded. “Danfoss is committed to helping the industry meet the climate, energy, and decarbonization goals with our existing technology and through R&D, innovation, and our Application Development Centers, but we’re also engaged on the policy side, which will play an equally important role in a turbulent future.”