Bringing to life the future of the marine industry

Maritime transport currently emits over 900 million tons of CO2 annually and is responsible for approximately 2.5% of global greenhouse gas emissions.

In recent years, decarbonizing the marine industry has become a top priority for the International Maritime Organization. In 2018, its members set a target of reducing international shipping’s total annual greenhouse gas emissions by at least 50% by 2050 compared to 2008 levels.

However, the maritime sector has been taking action and developing new standards for an emission-free industry since well before 2018. Back in 2013, naval professionals on the Danish island of Ærø decided to replace an ageing diesel ferry operating on the regional route between Søby and Fynshav with a fully-electric one.

A world first for the marine industry: covering longer distances than any other fully-electric ferry

From the beginning of the plan, it was clear that the length of the route was going to be a major challenge. The vessel would have to be designed to cover an unprecedented range for an electric ferry – seven times further than any other electric ferry operating anywhere in the world. Being fully-electric, the ferry wouldn’t be able to rely on fossil fuels either, even in emergency situations.

In 2015, the EU’s Horizon 2020 research and innovation program agreed to support the project, which became known as the Horizon 2020 E-ferry Project.

The E-ferry project needed to achieve two main objectives. Firstly, to design and build an innovative fully-electric vessel which would incorporate an energy-efficient design, lightweight equipment and materials, and state-of-the-art electric-only systems with an automated high-power charging system. The second objective was to validate the feasibility and cost-effectiveness of the concept to the industry and ferry operators. The fully-electric ferry had to be able to cover distances of up to 22 nautical miles in the Danish part of the Baltic Sea that were, at the time, only operated by conventional diesel-powered vessels.

In order to bring the project to life, several European manufacturers were approached to deliver cutting-edge technology and know-how in both technical and regulatory areas. The final team consisted of:

Baptised Ellen, the E-ferry was designed by local firm Jens Kristensen Consulting Naval Architects and built by Søby Værft. The Ellen E-ferry is just under 60m long with a breadth of approximately 13m. Travelling at speeds between 12-12.5 knots, it is capable of carrying 198 passengers in summer months, with this capacity dropping to 147 during winter. The ferry can also carry 31 cars or five trucks on its open deck.

As well as having a capacity of 4.3MWh, the largest battery pack currently installed for maritime use, it is also the first electric ferry to have no emergency back-up generator on board.

Danfoss Editron was commissioned with the mammoth task of supplying the full-electric drivetrain powering the E-ferry. The company’s EDITRON system comprises two 750kW propulsion motors and two 250kW thruster motors, both of which are driven by synchronous reluctance assisted permanent magnet technology and are controlled by DC/AC inverters.

As well as the electric drivetrain, Danfoss Editron also provided the vessel’s power management system for the complete on-board automated power and load control. Additionally, the company delivered the onshore charging station and charging arm for the ferry’s 4.3MW battery.

A roaring success for the marine industry

The Ellen e-ferry entered operation on June 1st, 2019 and set milestone after milestone during her first year of service.

Compared to a similar modern diesel-powered ferry, Ellen annually saves around 2520 tons of CO2, 14.3 tons of NOX, 1.5 tons of SO2, 1.8 tons of CO and half a ton of particulate matter. The E-ferry is charged from the local grid on the island of Ærø, whose electricity demand is entirely powered by wind. Even if Ellen was to use electricity from the usual Danish grid mix, it would still save around 2010 tons of CO2 annually.

The E-ferry consumes around 1600kWh per return trip, performing better than what had been projected in the preliminary studies. This low average consumption combined with the efficiency of the EDITRON drivetrain system, the battery capacity of over 3.8MWh and a fast charger of 4MW at peak charge, proved that the E-ferry was a valid commercial alternative to its traditional diesel- and diesel-electric propelled counterparts.

Calculations showed that the initial high investment costs for building the E-ferry were compensated for after just five to eight years of operation. These calculations take into account the charging station’s cost and the possible need for replacing the battery pack twice over the ferry’s lifetime.

Such a quick amortization means that the operator will save between 24 and 36% in operating costs compared to operating a diesel or diesel-electric ferry for the remainder of the ferry’s estimated 30-year lifetime. 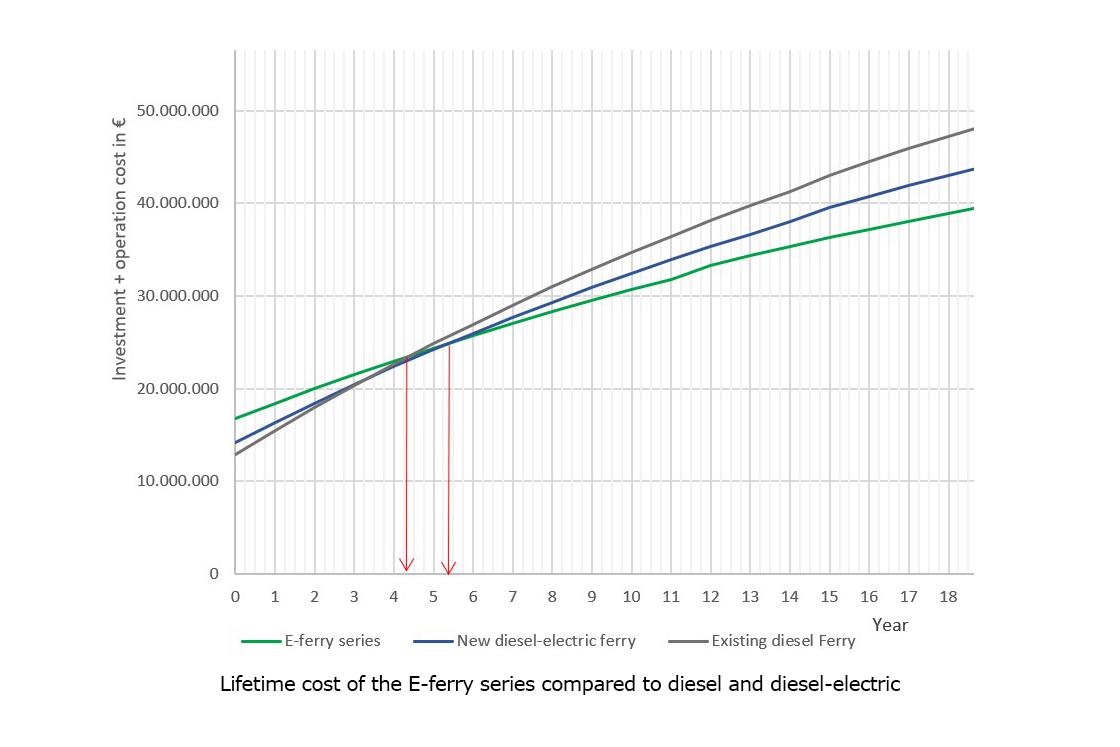 Optimized for passengers’ safety and comfort

The evaluation, conducted by the E-ferry project team after 1000 successful journeys, shows that Ellen has won unanimous support from her passengers.

Alongside its environmental benefits, passengers have highly rated the reduced noise and completely smog-free operations that come with operating the fully electric ferry. Overall, Ellen was rated either “extremely satisfying” or “very satisfying” in terms of safety, comfort and reduced travel time.

The E-ferry project has been applauded by the industry and won several awards, such as the prestigious Danish Design Awards in the “Game Changer” category. The E-ferry has received extensive coverage in international trade and mainstream press, with features in the BBC and the Guardian.

“The E-ferry project is a very good and concrete example of what a climate friendly future can look like – a ferry that runs on green electricity without discharging any environmentally harmful substances. I hope people will come to Ærø to experience Ellen and see how the standard for ferry transport can be in the future, not only in Denmark but all over the world.”

"Ellen is an excellent example of the future for electric transport: cleaner, greener and more efficient. It is a great project which demonstrates the potential for electric ferries to end users and the industry itself. It is an EU project and will be an exemplar for electric transport for many years to come. Electrification is key for Danfoss’ success in the future. We will electrify complex machinery, achieving not only reductions in CO2 and other emissions but also improving the productivity and efficiency of such machines. Danfoss is already recognized as a technology leader and we are investing heavily in the business to ensure we stay in the forefront of electrification.”