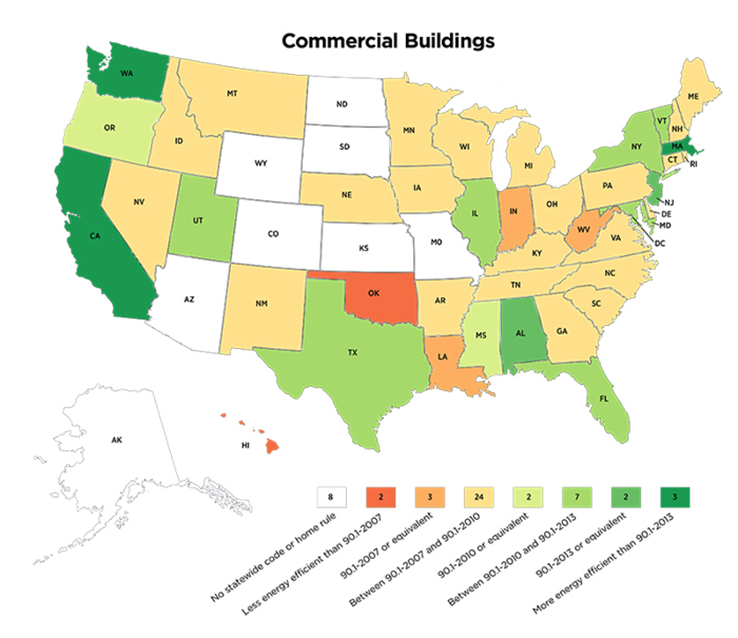 In the US, there are two significant energy efficiency governing bodies: the American Society of Heating, Refrigerating and Air-Conditioning Engineers (ASHRAE) and the US Department of Energy (DOE).

ASHRAE’s Standard 90.1 sets what constitutes a high-efficiency building, including setting minimum efficiency standards for a building’s cooling equipment. While this is a great objective, it is a slow process: 90.1’s last directive came in 2016 and will take at least another seven years to be fully adopted as each state has to individually adopt the directive into its building codes. The map in Figure 2 highlights how far behind most states are in adopting 90.1. As a result of this slow adoption, the DOE has stepped in to regulate rooftops, setting new, federally-mandated guidelines to circumvent the need for state-by-state adoption.

90.1 and the DOE are the main drivers behind these large-scale adoptions, specifically in air conditioning equipment: chillers, rooftops, ground source heat pumps, and data center cooling. To meet these new standards, OEMs will likely need to design new systems that can meet the integrated energy efficiency ratio (IEER) standard for rooftops. These new systems will likely result in fewer refrigeration circuits with more manifolded compressor designs or other modulation technology and feature more variable-speed drives. For both OEMs and component manufacturers, the next several years will require a lot of activity between these efficiency regulations and the refrigerant transitions previously mentioned.

The Air-conditioning, Heating, & Refrigeration Institute (AHRI), a trade organization comprised of OEMs and component manufacturers, evaluates equipment and publishes their findings, such as performance levels and capacities. The dots in Figure 3 above each represent a rooftop unit, the year it was manufactured, and the level at which each product is rated.

The solid gold and orange lines are DOE and 90.1 regulations. The yellow line is DOE Step 1, which was adopted on January 1, 2018. Thirty percent of units that were on the market from 2014 to 2016 are no longer allowed to be sold, due to them not meeting the new efficiency target. The biggest market interruption will come in 2023, when 85% of those units will become unsellable in the US, most likely resulting in significant product innovation.

The black dotted line represents the Consortium of Energy Efficiency (CEE), a voluntary, high-efficiency program that most OEMs have adopted, to announce when they develop a new high-efficiency unit. There are also prescriptive measures or requirements that 90.1 has, both for variable air volume (VAV) and constant volume systems.

Figure 4 above shows the capacity staging and fan control requirements of 90.1. The constant volume requirements are easier to achieve, while the VAV systems will require more advanced technology to control multiple or variable-speed products. 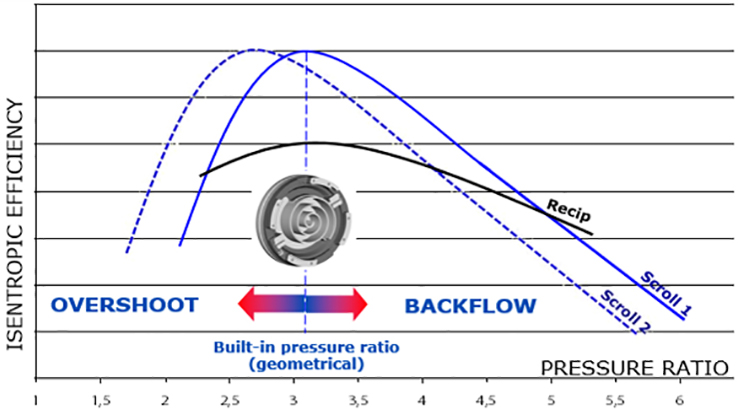 Figure 5 provides a picture of why the industry moved from reciprocal to scroll compressors. A benefit of using reciprocating compressors in refrigeration is that they have a very flat efficiency curve, whereas scrolls demonstrate higher efficiency, but at a narrower band. Scroll compressors have a very clear optimization point and are designed around applications that will allow them to operate there. That optimization point can be moved around a bit, but when it is designed around the application, it provides a massive benefit to performance. 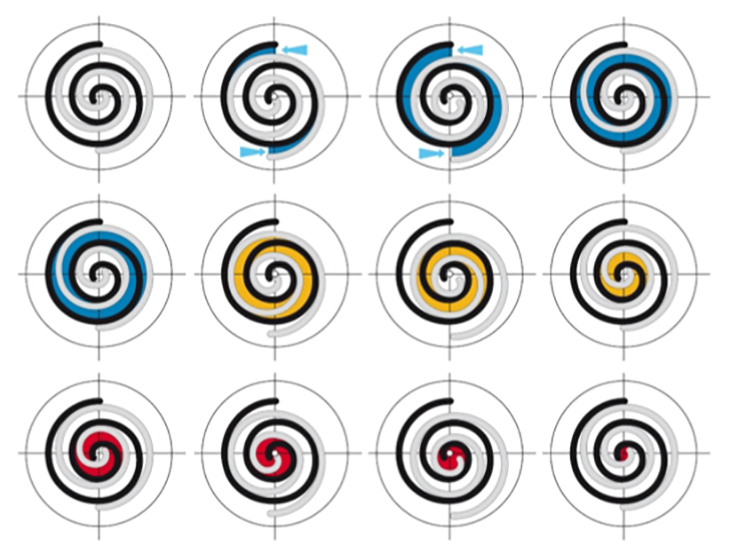 Figure 6 illustrates how scroll technology works. There are two spiraled strips of metal—one fixed and one orbiting—that compress refrigerant by progressively creating three pockets: an outer pocket, an intermediate pocket, and a final discharge pocket at the center.

Traditionally, refrigerant must be fully compressed in the intermediate pocket before it is discharged out of the center pocket, but Danfoss applies intermediate discharge valve (IDV) technology, placing discharge valves in the intermediate pocket of the compression cycle. This technology provides an efficiency benefit during low-pressure ratio conditions when the ambient temperature drops, as the compressor does not need to work as hard to deliver the same cooling capacity. This innovation is another incremental modification to scroll compressors that has been designed around the new regulations mentioned earlier.

Scroll compressors have undergone incremental innovations since their introduction, including being manifolded on a single refrigerant circuit with organ pipe. A more recent modification of scroll compressors is the introduction of variable-speed scrolls. These scrolls can have either induction motors or more advanced permanent magnet motors with higher turndown ratios that were previously only possible on fans or pumps. Almost all of these recent changes have been driven by demands made by new efficiency regulations.

EER and coefficient of performance (COP) can be used to compare the energy efficiency for different types of units, though they refer only to very specific operating conditions and are not fully representative of a real application. To properly quantify energy and economic savings which may be achieved by using variable-speed technology, it is necessary to compare the power consumption of two equivalent units: an example would be a traditional unit with two fixed-speed scroll compressors on the same refrigerant circuit and another unit with a hybrid manifold.

Variable-speed was initially attempted with induction motors, but the performance suffered due to drive losses. Variable-speed compressors offer extremely precise temperature and humidity control. With low in-rush and a high-power factor, there are great benefits in applying variable-speed, the biggest of which is performance.

As technologies continue to evolve, rooftop and other cooling systems will adapt and improve. What the future will hold is unseen, but all evidence points to it involving variable-speed scrolls.