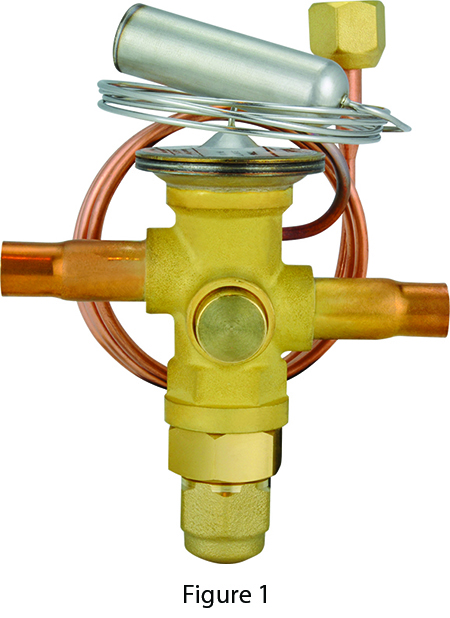 While there are different types of TXVs, each one has some things in common: a diaphragm, a power element, a setting spring, and an orifice.

There are three different forces at work in a TXV: bulb pressure, spring pressure, and evaporator pressure (see Figure 4). Bulb pressure comes from the bulb that is mounted at the outlet of the evaporator; the bulb senses the suction temperature and drives the diaphragm down if there is an increase. Spring pressure is constant and pushes up against the diaphragm, counter to the bulb pressure. The spring pressure is calibrated when the valve is set by the equipment manufacturer or the installer. Evaporator pressure pushes the diaphragm up when the suction pressure increases and comes from the evaporator load on the system, which varies according to different operating conditions, such as room temperature changes. Based on the balance between these three pressures, the valve will either open or close.

Figure 6 shows two types of port designs. In conventional or single port designs, the diaphragm can be influenced by pressure changes in the condenser. The general rule of thumb is that a conventional port design works best in systems with less than five tons of refrigerant, while larger systems work best with a balanced port design (though it is not uncommon to use a balanced port valve in smaller systems). A balanced port design isolates the condenser pressure from affecting the opening of the valve, necessitating the use of O-rings. However, the more O-rings used, the more friction will be created, requiring design measures to negate frictional loss in the TXV.

With a universal charge, the bulb filled with a liquid cross charge. Whenever the bulb senses an increase in suction line temperature, the liquid expands, increasing the pressure in the fixed volume, and pushes the diaphragm down, thereby opening the valve and allowing more liquid refrigerant into the evaporator. Unfortunately, vaporization is a dynamic process, which can produce sporadic superheat at the evaporator outlet. Think of liquid refrigerant changing to vapor like a pot of boiling water: the liquid does not instantaneously become a gas once the boiling point is reached, but changes into steam erratically. Similarly, the bulb might sense vapor one instant and liquid the next. In this scenario, a bulb with a universal charge will rapidly open and close the valve, a process called hunting. Hunting reduces the system’s efficiency, shortens the valves lifespan, and increases the risk of liquid refrigerant making its way to the compressor, which will damage it.

To avoid hunting, some TXVs add a ballast to the bulb (usually a clay brick), creating what is known as an anti-hunt charge. The ballast dampens the rate of expansion within the bulb, stabilizing the bulb pressure against the diaphragm by dampening the rate of temperature change to the bulb charge compared to the rate of temperature change of the suction line. This stabilization ensures that the TXV operates more efficiently and better protects the compressor.

There are two common approaches to what makes up bulb charge fluid. The first approach is to use the same refrigerant that is used in the system, i.e., using R-410A in the bulb for an R-410A system. The other common approach—and the one that Danfoss recommends—is called a cross charge. Cross charged bulbs mix a combination of different refrigerants with gases to flatten the pressure-temperature (P-T) curve (see Figure 8). Cross charges enable the TXV to perform similarly regarding the change in opening degree for a given change in superheat across a range of evaporator temperatures.