How the resilience challenge is impacting urban planning, finance, power generation and distribution, building design and the scientific research agenda was at issue when the June 12, 2018 Danfoss EnVisioneering Symposium convened in Washington, DC. Thought leaders and practitioners from industry, finance, science, advocacy and policy gathered for presentations and round-table discussion to explore a problem increasingly at the center of issues from building codes to product design, from energy sourcing to overall urban design.

The Challenge of Urban Resilience

Gail Sussman, Managing Director for Public Finance at Moody’s Investor Services, opened the event with a discussion of how the financial world is assessing resilience. Recent shocks and discernible trends are altering the financial risk profiles of cities and states alike, she suggested, with implications for the cost of funds they will face when turning to financial markets.

Financial obligations and vulnerabilities, especially of regions with strong economies and strong credit, can be intricate, from direct reinsurance roles to the indirect impact of economic and demographic disruption of regional economic activity. But the maze of inter-dependencies crystallizes in the capacity to repay debts, now and in the future. And sustained disruption resulting from a major shock -- be it violent weather or even a hacked computer system -- can compromise that capacity in countless ways.

Washington DC’s Chief Resilience Officer, Kevin Bush, shed light on how the resilience challenge is reshaping urban planning in one of America’s cities most forward-thinking cities. Bush focused on the capacity of the city to “bounce back.” He described the resilience challenge in terms of both major shocks and more chronic stresses and placed it in a context of rapid globalization, urbanization and climate change, with its both observed and projected impacts.

The task is to match the city’s resilience “immune system” to those challenges, which requires a focus on interlocking urban systems, including the building, health, electrical power, and transportation systems. The core need is for strategic systems integration that leverages the operational interdependence to provide creative ways to restore functionality quickly.

The public needs to be engaged to build buy-in, but it cannot always see the impact of engagement: buildings musty be designed for conditions decades away. So, it can be difficult to sustain the political will. Consequently, other challenges are more difficult, from institutionalizing the response to climate change in the building sector to leveraging resilience strategy for new sustainable economic opportunities. Change drives the risks of resilience failure in ways that governance can find hard to meet.

Jason Handley, Duke Energy’s Director for Smart Grid Emerging Technology and Operations, described Duke’s research and development arm as already acting on the implications of Sussman’s and Bush’s presentations for power generation and the grid, and he predicted that more utilities will move aggressively into R&D.

The next generation of the grid will be very different from historical models. It will, Handley expected, be not a mere delivery system, but a “relationship.” DC and AC distribution will run parallel. The electricity grid will run in tandem with a communications grid, enabling smart devices, smart buildings and smart communities. Customers will demand greater choice in a system in which the grid is more interactive and integrates assets more diversely owned and positioned. There will be broader reliance on microgrids. Energy efficiency and demand response will be easier, and “the grid” will more closely resemble an integrated ensemble of small grids with multiple points of access by alternative energy sources. Decision making will be data driven -- with vastly more data available and a vastly enlarged data analysis capacity.

The trend will be toward grid interoperability, so the grid can offer hardening against shocks and self-optimization, a wealth of data and analytic capability, and alignment of the demands of resilience and energy efficiency.

Gregory Pavlak, Assistant Professor of Architectural Engineering at Penn State University, took the discussion further down the path Jason Handley had opened. He proposed a three-dimensional approach to defining resilience -- as preparedness, attenuation, and adaptability. Preparedness, Pavlak argued, focuses on planning for threats. Attenuation, alternatively, focused on reducing the magnitude or duration of the disruption by focusing on addressing critical load issues. Adaptability, finally, looked at ways to adjust through dynamic re-prioritization or optimization strategies.

Pavlak’s conception requires shift to community scale analysis. It opens the prospect, however, that a few well targeted research initiatives -- focusing on optimization for a portfolio of buildings -- could provide disproportionately greater resilience and better energy performance by making it easier to right-size energy resources.

Richard Sweetser, Senior Advisor to the US Department of Energy Mid-Atlantic CHP Technical Assistance Partnership, maintained that progress on resilience requires taking seriously another basic change occurring in grid strategy: a shift from the traditional providers-customers transaction model. One potential model being discussed is where the utility is central to a blockchain like transaction model in which microgrids can provide a structure for a multitude of supply/purchase transactions where the utility serves as the transaction platform, an idea that comports well with the broad notion of a self-optimizing grid.

In such a context, combining microgrids with a new transaction model, combined heat and power is especially valuable in sustaining resilience. It can provide a continuous supply of electric and thermal energy, enhance overall grid stability and relieve congestion, withstand long outages, support variable renewable energy sources and perhaps, most importantly, better enable microgrid deployment for a diverse generation mix.

The future of resilience emerges on a platform of a new and more agile grid structure with a cyber-enhanced transaction model and supporting CHP technology to create an electrical power generation and distribution system with greater dexterity and adaptability than any previously envisioned. Renewables can be utilized more reliably and the whole can be secured by a focus on resilient facility design.

Greg Lush, Vice President for Innovation at EMCOR Services Mesa Energy Systems, emphasized the ability of a building to recover quickly from a disruptive event as the core requirement of resilience and that the requisites of resilience are region and industry specific. That said, his focus was on pragmatic solutions currently available that can have impact today.

“The building must have a pulse,” Lush argued, a kind of signal that allows managers “to feel and see what the building is doing.” Today’s buildings, however, while beginning to provide information, are far from “smart” -- and improvement is slow.

The “intelligence” of a building depends on “how well we listen to the building” and enhance the “speed of operational adjustment” -- or the manager’s ability to acquire and apply knowledge to real time building management. In the context of contemporary learning technology, that means reliance on cloud-based data collection and analysis. In brief, buildings need sensors to monitor performance and programmers need to be positioned to control buildings based on analysis of the data received.

If it is objected that such innovation is too costly or costs building managers operational control, Lush suggested a straightforward approach to assessing the benefits of the shift: list the worst things that can happen, how they could be prevented, how they can be repaired, and the costs of inaction over six-month, one year, and three-year timeframes. Said another way, Lush proposed taking seriously the true cost of resilience failure. He acknowledged, however, that change has been slow and pointed to the role of experience in raising the velocity of change: it was major breaches in cyber security that raised its priority to current levels, not the abstract assessment of risk.

Greg Lush’s presentation focused on what can be done here and now that would significantly upgrade the resilience of buildings. The final question is what innovations might lay over the horizon. Jared Langevin, Research Scientist and Engineer at the Lawrence Berkeley National Laboratory, and Karma Sawyer, Director, Emerging Technologies Program, U.S. Department of Energy Building Technologies Office, sought to cast a light into the future of building research.

Within that context, Langevin outlined new lines of inquiry on resilience. He suggested that the research community establish definitions of resilience across multiple temporal and spatial scales -- building, city, utility, and region within short and long-term time horizons. Likewise, methods for measuring, modeling and evaluating resilience need to be developed, requiring new metrics and probabilistic, risk-based approaches. Third, the tension between resilience and energy efficiency, and that between resilience and the design of the current building stock, needs to be assessed. Finally, because existing simulation tools do not focus uniquely on resilience as a goal, new decision-making tools are needed. But perhaps the most dramatic innovation Langevin introduced was a shift in the orientation of research from “fail-safe” to safe-to-fail” -- e.g. a building that is designed to flood but easily cleaned up afterward -- which depends on passive survivability and functionality during emergencies.

Sawyer turned the focus to research on building interactivity with the grid and emphasized how far new research into resilience can benefit from past work on energy efficiency. The path of such research is opened by recognition that buildings can provide services to the grid. Buildings are aggregators of sources of energy demand and supply, from electric cars to variable renewable energy resources to energy storage capacity. As such, they are underutilized in grid planning and operation. Buildings can take signals from grid operators, take action in response to those signals, and provide value through avoided costs. Admittedly, different services have different technical requirements. But buildings can help microgrids continue to function when fuel lines are disrupted, provide geographically independent fuels, enhance system flexibility and reduce infrastructure requirements. 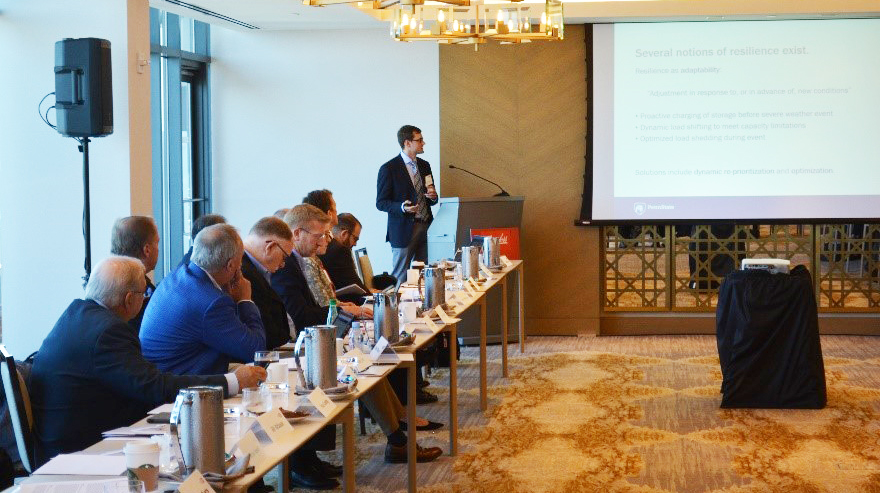