Today, drives are more than simple power processors. With the ability to act as sensors and sensor hubs, to process, store and analyze data, along with connectivity capabilities, drives are vital elements in modern automation systems.  Integrated condition-based monitoring functionality enables new ways of performing maintenance, such as condition-based maintenance.

The fourth industrial revolution has emerged as a result of networking computers, people, and devices fueled by data and machine learning. Although the term “Industry 4.0” is quite vague, a possible definition for Industry 4.0 describes the intelligent networking of people, devices, and systems by utilizing all possibilities of digitalization across the entire value chain.

The impact of Industry 4.0 on motor systems is a migration from the “automation pyramid” to “networked systems”. This means that the various elements of the system, such as motors, drives, sensors and controls, are interconnected and connected to a cloud - a data center where data is stored, processed, analyzed, and decisions are made. 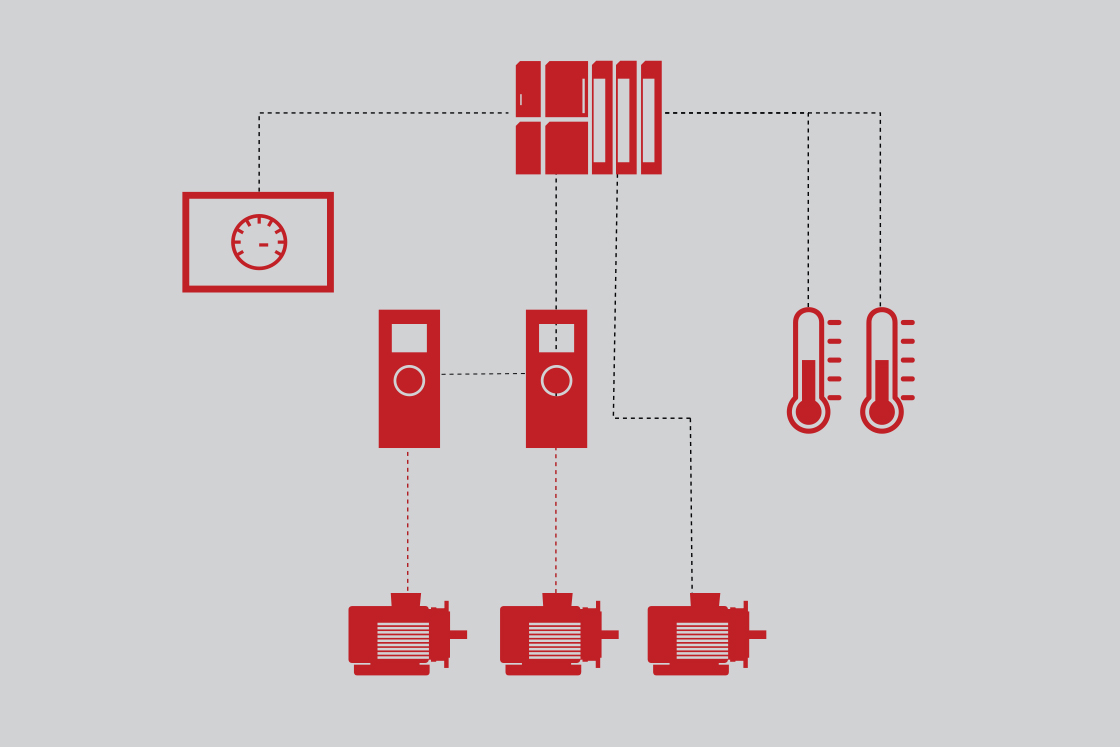 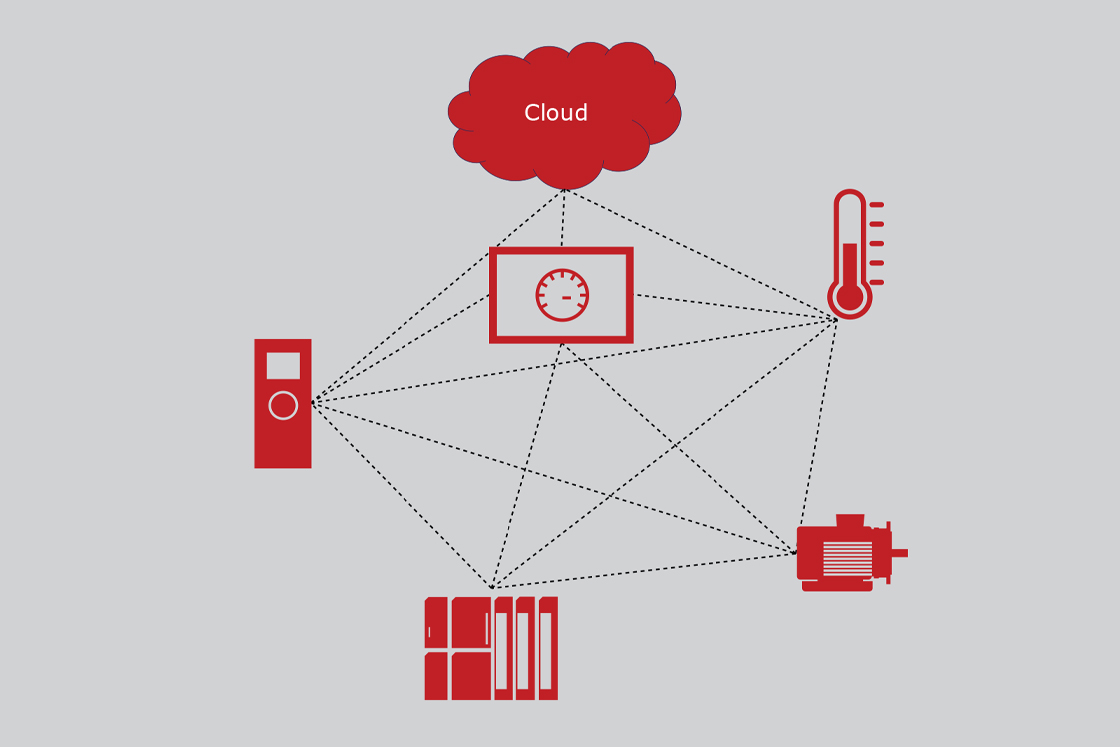 In an automation network, the amount of data is prominent. As data is mainly produced by sensors, the number of sensors in modern automation systems is increasing. Motors and driven machines such as fans, pumps and conveyors are not the most obvious participants in a data network. Sensors are therefore required to collect data from these machines. The sensors are connected to the data network using various means to utilize the data. During the introduction of an advanced condition monitoring system, the additional cost of sensors and connectivity is often seen as a barrier.

What is an intelligent drive?

In the Industry 4.0 network, the drive plays an important role and is characterized by some enabling features:

Information from the drive can be identified as follows:

Motor current signature analysis techniques enable the drive to monitor the condition of the motor and application. The technique allows to potentially eliminate physical sensors or extract early fault signatures which might not have been possible to detect. For example, using the technique makes it possible to detect winding faults in advance or mechanical load eccentricity.

The concept of the drive as a sensor hub entails connecting external sensors to the drive, thus saving the need for a gateway to connect the physical sensor to the data network. Vibration sensors, pressure sensors, and temperature sensors are examples of sensors which can be connected to the drive. The advantage of the concept is not only related to cost, but also enabling the correlation of sensor data with different types of data present in the drive. An obvious example is the correlation of vibration level from an external sensor with the motor speed, as vibration is speed dependent.

The following are different kinds of maintenance strategies:

Why is condition-based maintenance needed?

Corrective and preventive maintenance are fault (event) or time-based. Therefore, maintenance is performed in case of fault(s) (corrective) or after pre-established operation hours (preventive). These types of maintenance do not use any feedback from the actual application.

Condition-based maintenance is the easiest and most intuitive maintenance technique based on data from the actual application. The data acquired is used to monitor the health of the equipment in service. For this purpose, key parameters are selected as indicators

to identify developing faults. The condition of a piece of equipment typically degrades overtime. This is illustrated by the P-f curve which shows a typical degradation pattern. Functional failure occurs when the equipment fails to perform the intended function. The idea of condition-based maintenance is to detect the potential failure before an actual failure occurs. 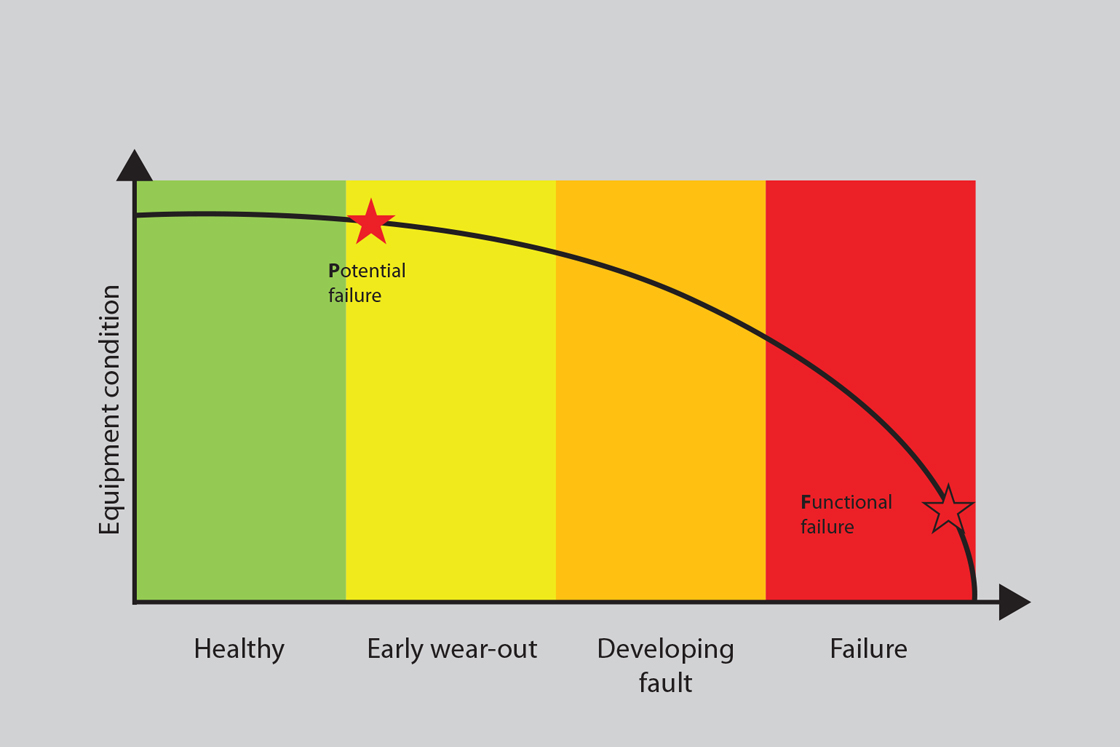 In this case, planning maintenance actions provides many advantages such as:

An integral part of condition-based maintenance involves monitoring the condition of the equipment. In variable speed applications, the condition of the application often depends on speed. For example, vibration levels tend to get higher at higher speeds, although this relationship is not linear. Indeed, resonances can occur at certain speeds and then disappear when the speed is increased.

Using an independent system to monitor the condition of a variable speed application is complicated by the need for knowing the speed and the correlating monitored value with speed. Using drives for condition monitoring (“drive as a sensor” or “drive as a sensor hub”) is an advantageous solution, as the information about application speed is already present in the drive. Additionally, information about the load/motor torque and acceleration is readily available in the drive.

Manual baseline: When the baseline values are defined using prior experience, the known values are programmed into the drive.

the application does not run at full capacity or a wear-in period is needed. In these situations, the baseline run must be performed after the wear-in period to capture an operating state which is as close to normal operations as possible.

Online baseline: This is an advanced method which captures baseline data during normal operation. This is useful in situations when a baseline run can not be performed, because the application does not allow exploring the entire speed range.

After establishing the baseline, the next step is to generate thresholds for warnings and alarms. The thresholds indicate the condition of the application during which the user must be notified. There are various ways to indicate the condition of the equipment and one of the most popular in the industry is a traffic light status with four colors which is described in the VDMA specification 24582 Fieldbus neutral reference for condition monitoring in factory automation.

The colors signify the following:

Green: Indicates the equipment is in good condition and performs efficiently.

Yellow: Indicates Warning 1 stage and signifies the first threshold is exceeded. A maintenance action can be planned by maintenance personnel.

Orange: Indicates Warning 2 or critical stage and signifies the second threshold is exceeded. Immediate maintenance action must be carried out by maintenance personnel.

Red: Indicates an alarm and signifies the machine will stop and corrective maintenance is needed.

2. Define thresholds for warnings and alarms

The following methods are used to define threshold values:

Monitoring is performed with continuous comparison to the thresholds. During normal operation, the actual values are compared with the threshold value. When the monitored parameters exceed a threshold for a pre-defined time, a warning or alarm is activated. The timer is configured to act as a filter, so that short transients do not trigger warnings and alarms.

Actual monitored values can be read from the drive via the LCP, fieldbus communication, or IoT communication. Moreover, digital outputs can be configured to react to specific warnings and alarms. Some drives have a built-in web server which can also be used for reading the condition status.

Today, drives are more than simple power processors. With the ability to act as sensors and sensor hubs, to process, store and analyze data, along with connectivity capabilities, drives are vital elements in modern automation systems.

Drives are often already present in automation installations and therefore present a great opportunity to upgrade to Industry 4.0.

This enables new ways of performing maintenance, such as condition-based maintenance. The functions are already available in some drives and early adopters have already started using the drive as a sensor.