Hybridization of vessels allows you to use the most optimal energy source for the required task, giving you a range of benefits from less environmental emissions over noise reductions to reduced maintenance efforts.

Shipyard and vessel owners are investing more and more in marine hybrid systems to increase flexibility in design and installation, optimize operational performance (with regards to energy and power consumption), and minimize environmental impact.

Stringent requirements for efficiency and emissions control have improved new vessels massively in the past decade, and retrofits will further improve the existing fleets ensuring we meet the targets set for the industry 1.

In this article we cover hybrid propulsion and why hybrid systems are crucial in our transition to a more sustainable maritime fleet.

Simply put, the efficiency of a diesel engine is its ability to turn fuel into mechanical energy. A general depiction of the characteristics of engines is shown in Figure 1. 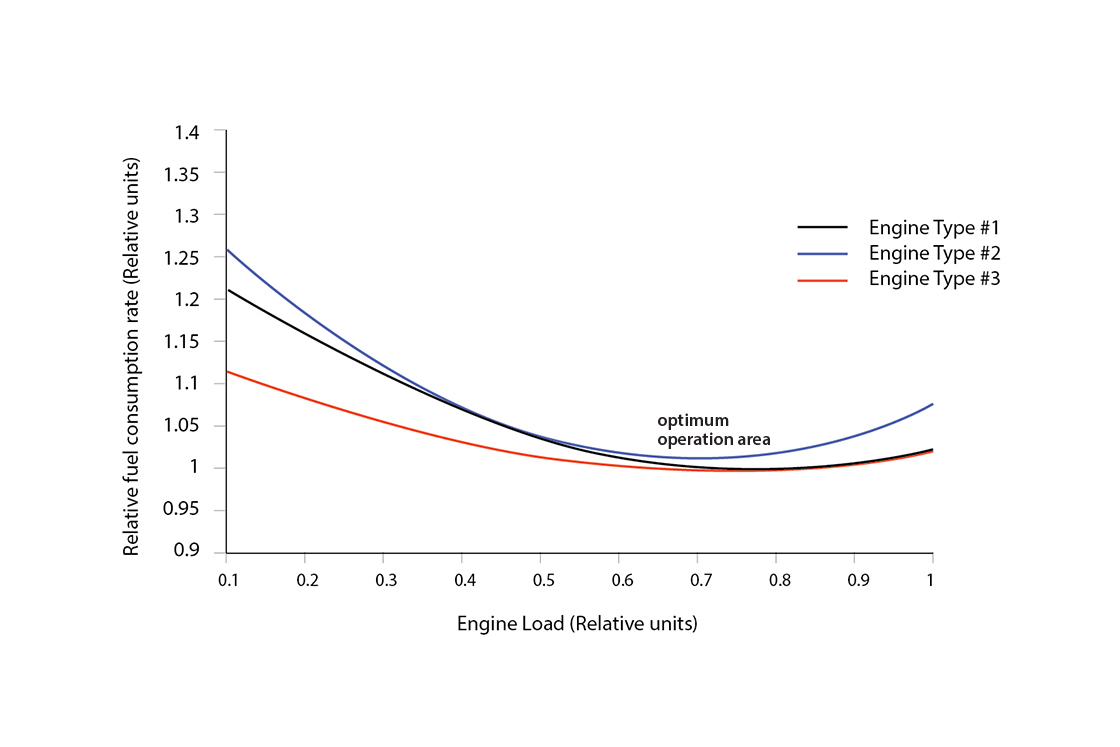 Figure 1 The relative specific fuel-oil consumption as a function of the relative engine load.

As seen, the consumption is a non-linear function of engine load, and this function has a minimum at a specific load. Depending on make it lies around 65-80%. Hence to minimize fuel consumption, the engine load should sit at around 2/3 of the maximum capacity 2.

However, the typical operating time of at least smaller marine vessels includes a significant amount of loitering at low speeds. Take tugs, for example. They spend a lot of their service time idling with their main (very large) engines running and ready to respond. What a waste of energy!

Pure diesel and marine gas oil have a fairly fast dynamic performance (100 kW/second for a 2 MW generator). However, the Paris agreement, the increase of Emission Controlled Areas and the IMO’s commitment to a 50% emissions-cut by 2050, require significant improvements in vessel fuel consumption, and emission levels 3. New fuel types and the use of scrubbers to clean the exhaust gas will be prevalent moving forward.

Lower environmental impact fuels like Liquid Natural Gas (LNG) and other bio fuels do not emit any SOx gasses or particles. Using LNG, NOx emissions are reduced with up to 85% and CO2 emissions by at least 20% 3. However, these fuel types are characterized by slower change response. They are not well-suited to abrupt changes in loading. Hence a need to have an even load on the engines arises. For example, direct-start thrusters or on-board compressors can demand huge loads in seconds.

Traditionally, the way to deal with this has been to keep a large number of generators running as a spinning reserve ready for the peak loads. These generators just keep running, ready for a possible need for the extended power.  However, there are better ways to solve peak demands, enabling practical use of these low-emission fuels.

As seen above, fuel-driven engines run best at a static load of around 65-80% of capacity depending on make. But power fluctuations happen all the time on a vessel. Wind and waves affecting propulsion, onboard machinery switching on and off and the need for instant thrust for turning or stopping all exert dynamic loads upon the system.

Electronics don’t mind dynamics. Electronics are instantaneous, reacting in milli-seconds rather than seconds, and can meet the need for rapid changes in power demand.

The main engines and generators are usually combined with an integrated energy storage in the form of batteries or super capacitors. The intention is to hybridize either the energy production ensuring generator optimization (explained above) or to hybridize the machine consuming the energy to optimize its behavior.

With hybrid solutions, batteries and smaller diesel generators in collaboration can be used to provide energy to the vessel when it is idling, transiting, turning, starting, or stopping. Main engines can be stopped.

Letting fuel-driven engines run at their optimum, and having electronics take care of peak demand, means that the need for engine-based spinning capacity is gone. When you apply this approach, you get more power from the generators because they work at the optimum power point - and fewer of them are needed. That saves weight, money and effort for installation, operation and maintenance. The vessel power management system automatically continuously calculates the optimum number of engine revolutions and defines the optimal combination of power sources for the whole system. Due to the reduced number of running engines and generators, noise levels are minimized and fuel consumption is reduced. To top it off, wear on engines/generators is also reduced, hence the maintenance intervals would be prolonged, potentially by up to 50%.

This is an example of a ship AC grid including grid converter, DC storages and shore supply: 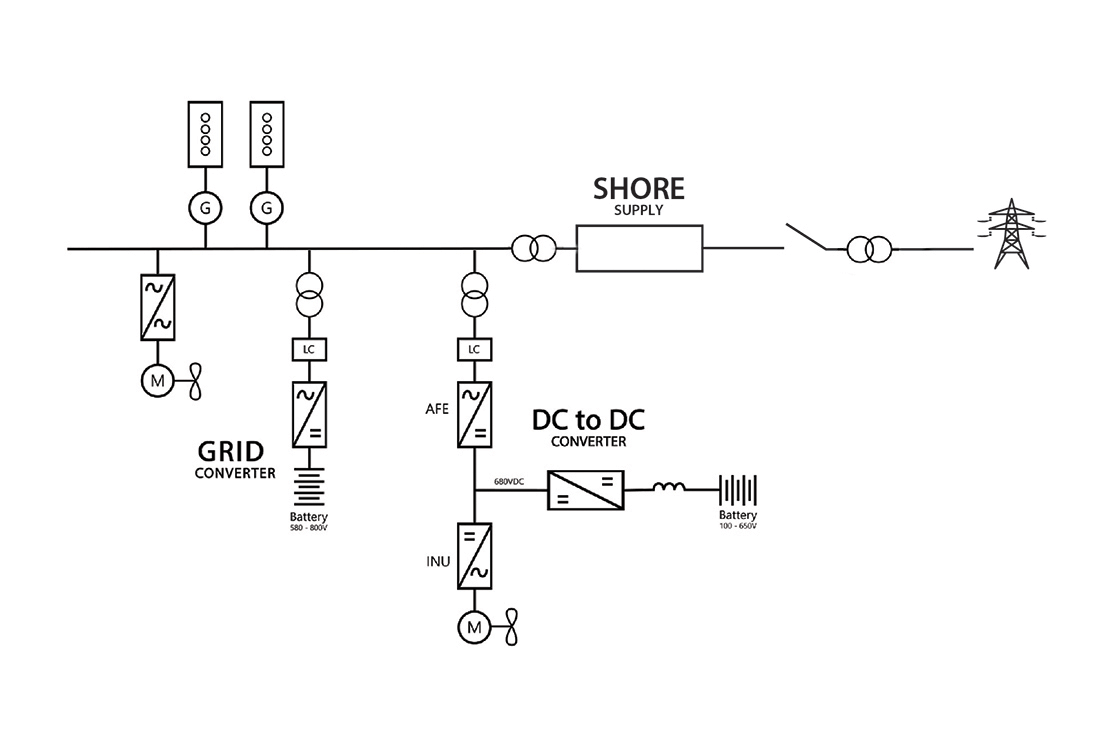 Figure 2 Example of a ship AC grid including DC storage and shore supply.

The energy storage system for the AC grid on board a vessel is bidirectional, as shown in Figure 2. The bidirectionality ensures that when a load is eased the excess power generated from the fuel driven engines is used for charging the batteries, hence the generator does not see any abrupt changes.

As an example, if you put excessively heavy demands on the diesel generator you risk that the generator protection mechanism shuts it off to protect itself. That in turn will put excess load on the other generators, creating a ripple effect, in worst case rendering the power system void, meaning total black out is inevitable. 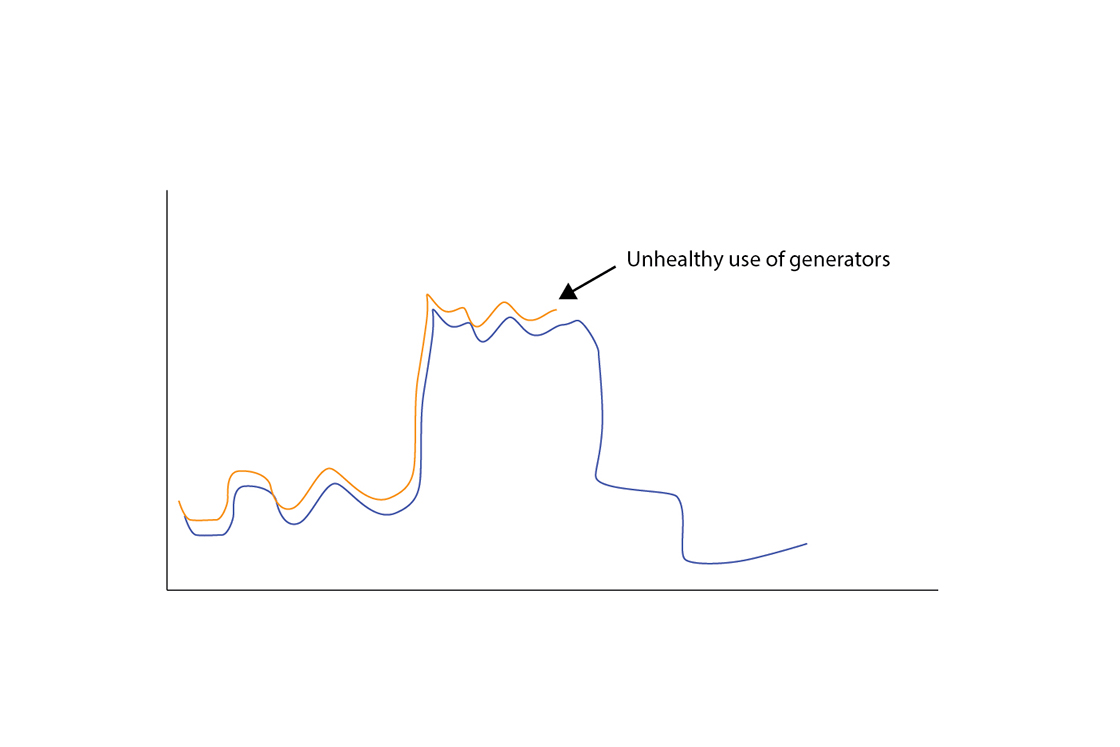 Figure 3 Abrupt changes to engines/generators are unwanted and can lead to black out of vessel.

Instead, if you let the energy storage system take these rapid changes, the engine and generator will experience a smooth rise and fall of power need. The onboard management system ensures the load is tapered off in a controlled manner suitable for the change characteristic of that particular engine. 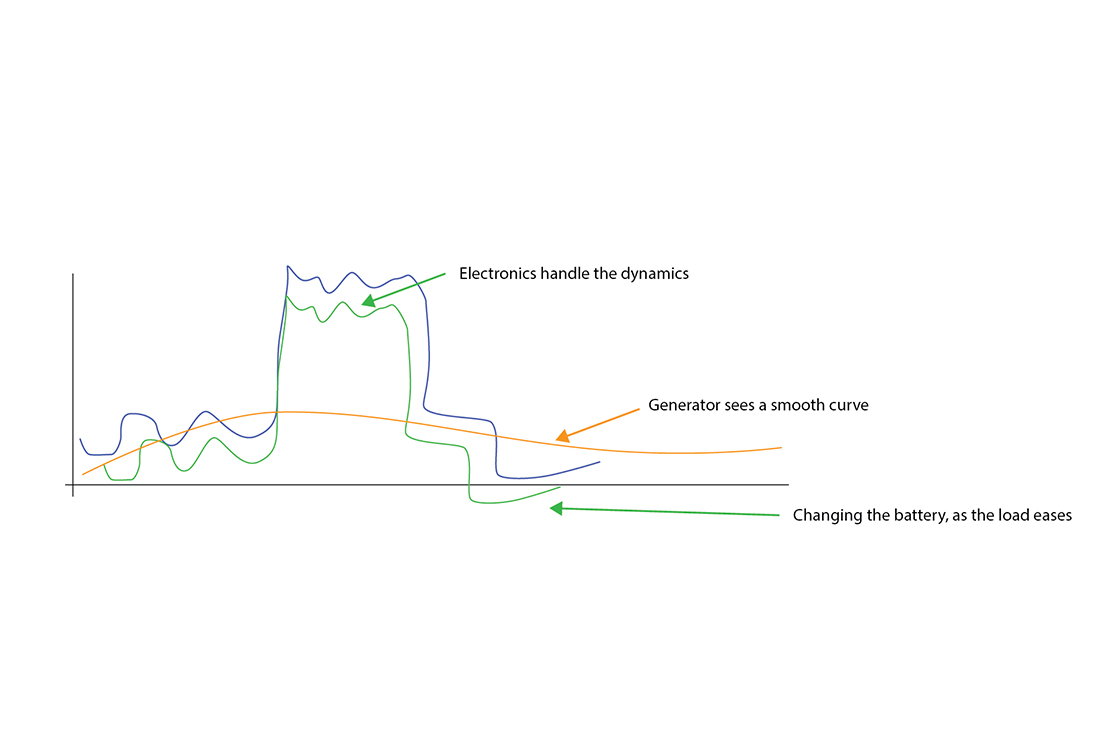 For this the power control/base current reference to the storage system (the AC drive) is needed in order to cover the rapid load changes.

To ensure the best possible utilization of equipment, you need load sharing between your diesel generators and the energy storage.

Load sharing can be made either through the drooping function for both frequency and voltage or by using the isosynchronous mode 4.

When sharing the active load equally between all power sources, the setting should be the equivalent to the other power sources in the system. 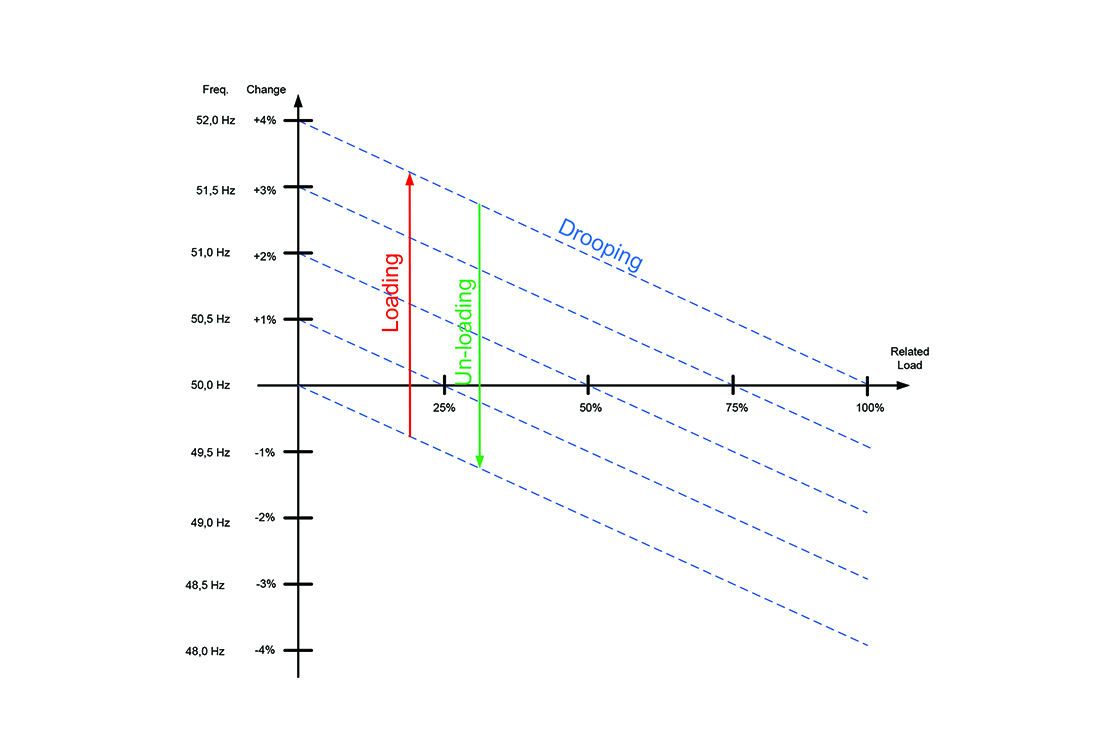 As with any electrical system, short circuits may occur. If a short circuit occurs you want to isolate the faulty area, not to damage the drives, which would render the entire system void. 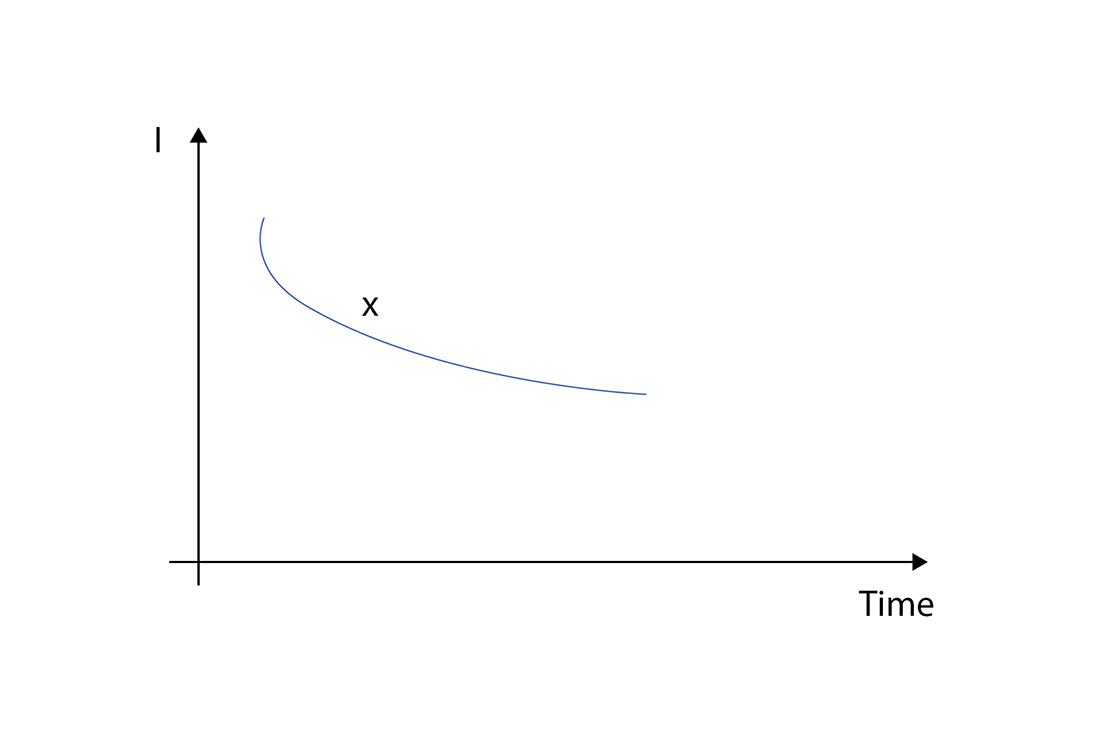 To burn or trip a fuse you need to sustain high enough current for long enough time for it to blow (marked with x). To accommodate this characteristic in the fuse, we program the drive to ensure that those thresholds are met.

When a fault occurs, the short cut current is rapidly on the rise. If the current reaches the drive’s hardware trip level (Over Current Trip Limit), in order to protect the hardware the drive stops and a complete black out is inevitable. This is unwanted behavior. 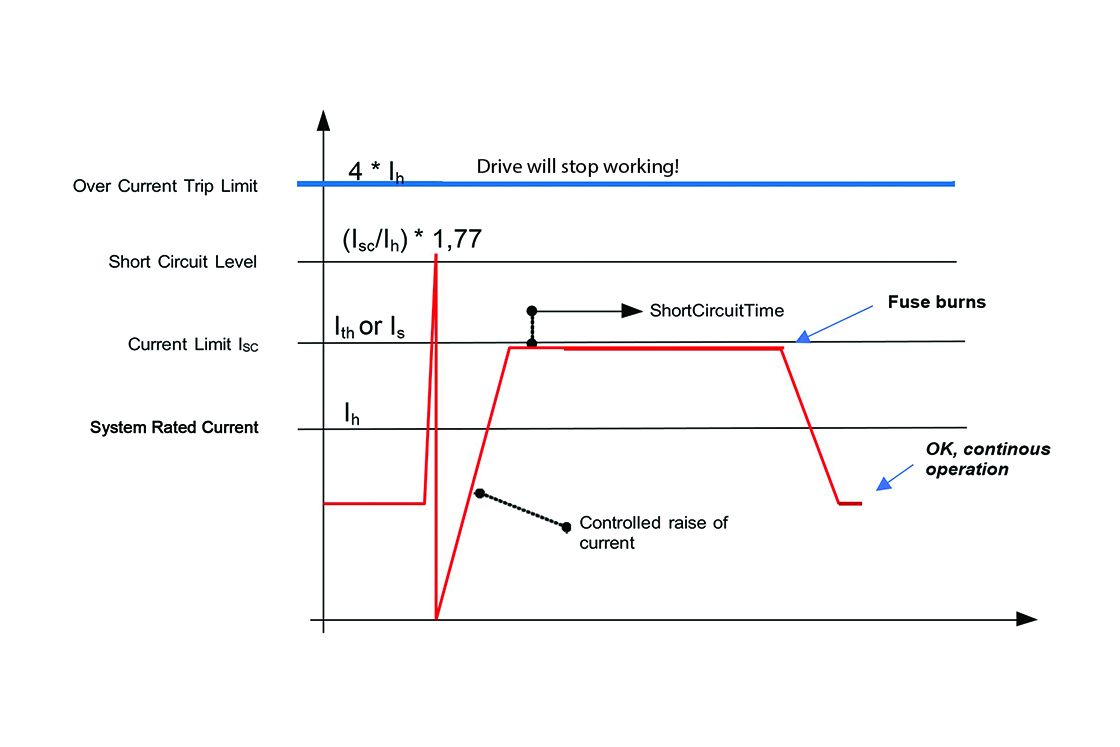 By using the drive to manage the current, the rising current can be detected and cut off at a predefined Short Circuit Level. This level is adjustable and should be set with a safety margin to the HW trip level. The current drops to 0. The current controller then takes the current to the short circuit current limit (also adjustable parameter according to fuse characteristic). The short circuit time is also set according to fuse characteristic. Hence known current for a known amount of time.

Now everything is in place to blow only the fuse to the faulty circuit and not black out the entire system.

Introducing energy storage to vessels has the potential to significantly reduce the fuel consumption and lifetime cost. At the same time, it can have a substantially positive impact on the emission levels, ensuring that the targets set by the international community are reached.

Battery storage allows for optimal utilization of engines or generators according to their specifications, it removes the need for excess spinning capacity and over-dimensioning.

Battery storage as back up function ensures that you will have alternative power sources available in case of a malfunction on main engines. As in your private household, only the galley fuses are blown when the chef puts on the kettle, stovetop and oven right when the captain needs extra throttle.