Ice and snow melting in the City of Buffalo, USA

According to the National Weather Service, a series of lake effect events and clipper-type systems dumped 112 inches of snow on Buffalo, New York, in the winter of 2014-15. In an area accustomed to harsh winters, this was still unusual – about 18 inches above normal. But even this impressive amount of snow was no match for the Danfoss snow melt system installed at Canalside.

When it snows, this system melts

According to the National Weather Service, a series of lake effect events and clipper-type systems dumped 112 inches of snow on Buffalo, New York, in the winter of 2014-15. In an area accustomed to harsh winters, this was still unusual – about 18 inches above normal. But even this impressive amount of snow was no match for the Danfoss snow melt system installed at Canalside, the heart of Buffalo’s waterfront revitalization.

For much of the 19th century, Buffalo’s Inner Harbor was one of the world’s most profitable business centers. The bustling port marked the western terminus of the Erie Canal and served as a gateway to the West. But all of this changed with the arrival of trains and automobiles in the early 20th century. Harbor activity sharply declined, and eventually, much of the site was filled in with stones and dirt to accommodate streets and parking.

In 1999, the Erie Canal Harbor Redevelopment Project outlined plans to reclaim the area for restoration. Sixteen years and more than $300 million later, the restored area encompasses Canalside, a mixed use district that reconnects downtown Buffalo to the harbor. The redeveloped center of activity includes shallow canals restored to their 1825 footprint and sidewalks where towpaths once accommodated mules that pulled barges along the canals. During the summer, residents and visitors can rent paddle boats and remote control sailboats for use on the replicated canals, while winter brings with it the opportunity to ice skate on these same waters. 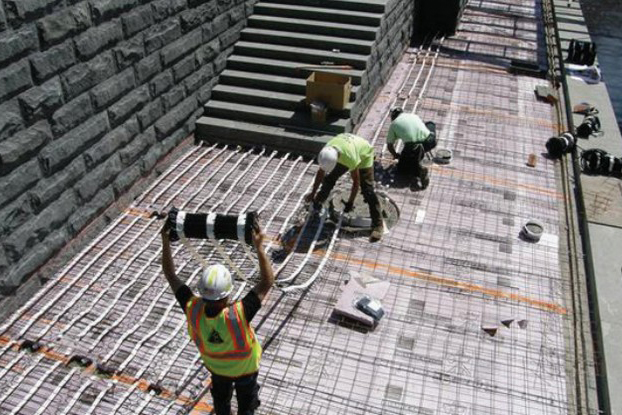 ''The snow melt system was one of the highlights of the project. The system was easy to install, from a product perspective. But, in order to ensure the warranty from Danfoss, testing was critical. The resistance tests alone required us to test the cables when we received them to make sure they weren’t damaged during shipment. Then, we tested them after we installed them, again as the concrete was poured and finally after the concrete was poured. In this project, the cables passed every test, which speaks to their durability and how well they are manufactured.''
- Tom Zielke, O’Connell Electric

Snow melt system clears path to canals Winter also brings snow and ice to the harbor. If the city hoped to offer ice skating on the canal, it needed to find a way to keep area sidewalks around the canals clear and dry to offer safe access to and from the skating area. That’s where the Danfoss snow melt system comes in. Provided by Comfort Radiant Heating, LLC, Clifton, New York, and installed by O’Connell Electric Company, Inc., Victor, New York, the snow melt system uses 8,000 square feet of Danfoss GX mats and cables, 10 digital sensors and five GX 850 dual zone automatic control panels paired with five electric contactor and timer panels that control each of the system’s five zones. Danfoss provided the electrical contractor with diagrams indicating how the mats should be laid down and pairings of zones to controllers. Because the Canalside project marked O’Connell Electric’s first experience with the snow melt system, the company hired Russ Hacker, owner of Comfort Radiant, as a consultant who could walk them through the installation process. “We knew the first day we met Russ that this was the right product and he was the right person to help us install it properly,” said Joe Pellerite, executive vice president of operations at the electrical contracting firm. “He met with everyone involved in the project—the general contractor, masons and our electricians—to instill in them the importance of following the proper procedures during installation.” 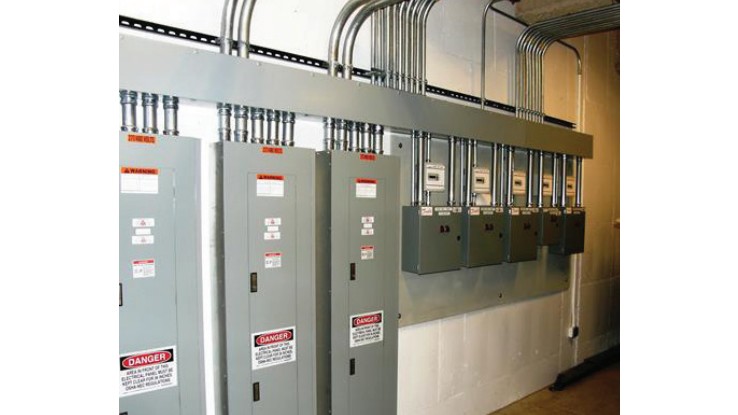 Mats and sensors embedded in concrete

Engineered for use in concrete, asphalt and under pavers, the Danfoss line voltage system consists of twin conductor heating cables and a single-point connection with a 20-foot cold lead. The system relies on digital sensors to provide precise feedback regarding precipitation and temperature and an automatic control panel that delivers total control of snow melting system set points. The GX system is embedded during paving. Just before concrete is poured, electricians attach the mats to the reinforcement mesh that ends up in the middle of the pour. Sensors, too, are embedded in the poured concrete.

Pellerite offered similar comments about the mats. “I think the beauty of the mats is how well they’re manufactured. Everything is laid out in a system and designed to meet a particular application. We were able to match up the sidewalk lengths with longer leads that we needed to hit the sensors. Danfoss provided the extra length the project required, and the mats went down extremely well, which I attribute to foresight in product design and manufacturing.”

Snow never has a chance

The temperature setting for the Buffalo snow melt system is 30 degrees, so that any time the temperature of the concrete dips below 30 degrees and there is moisture on the slab, the digital sensors signal the controllers, located in the basement of a building adjacent to the canals. The controllers act on this information, delivering 50 watts of electricity per square foot to melt snow as it falls on the sidewalk.

“With this system in place, snow never has the opportunity to accumulate,” said Hacker. “The slab warms when snow or ice begins to fall in freezing temperatures. This is especially important in areas like Buffalo that can experience one or two weeks of 10- to 20-degree temperatures followed by a sudden warm up and a snowstorm. Rather than snow accumulating on a cold sidewalk, it falls on one that is always prepared to melt snow. Given Buffalo parameters - how much snow they can get and how quickly they can get it - a system like this helps prepare for just such a scenario.

The city of Buffalo also appreciates a solution that reduces the costs and environmental impact associated with applying chemicals, owning snow clearing machinery or hiring an outside service. According to Hoyt, Canalside attracted between 55,000 and 70,000 people last winter. “We’d like to build on that success and transform additional parts of the harbor area into 12-month operations,” he said. “We’re very pleased with the way the snow melt system performed for us, and I think we will absolutely consider it and encourage future developers to consider it as we move forward with future development.”

Having completed the harbor job, Pellerite is ready to do another one, confident he knows how to install the product and what to expect. “Granted, this isn’t something you just take out of the box, lay down and have concrete poured over it,” he said. “You need to patiently follow the directions Danfoss provides. But if you do that, you’re not going to be disappointed, because this product is going to do exactly what it says it will do. It’s really that simple and that effective.”