The new Dynamic Valve™ was the obvious solution at Sønderborg State School, where the heating system caused significant problems. The school, a local HVAC company and Danfoss teamed up to find the solution that brought comfort back to the classrooms.

Sønderborg State School moved into the city’s courthouse in 2011 in order to solve the high school’s problem of limited space. The school’s students and staff were met with the consequences of a confusing heating system. Despite extensive energy renovations, there were still problems with inefficient night temperature reduction and insufficient temperature control in the individual classrooms. The comfort level was not improved by the students’ habit of turning up the radiators in the morning to heat the rooms. This was often followed by the windows being opened in order to adjust the thermostat back to its normal level. This meant that the heat consumption was off the charts, and the heating system needed significant improvements.

The school was fully aware of the building’s optimization potential and made a number of improvements. However, they had trouble finding a solution for the water balance that was both affordable and effective. 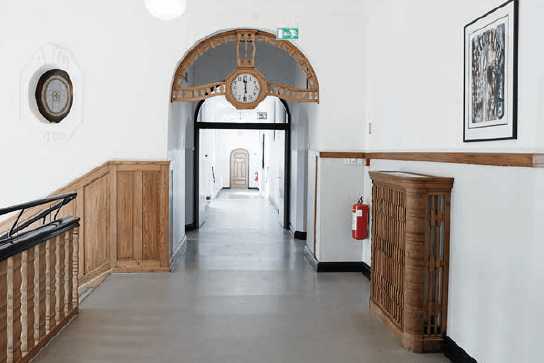 A solution based on knowledge and trust

Morten Kanne-Hansen is the school’s technical manager and has been following these problems closely: “We had a lot to consider before choosing a solution in this area. We made our decision based on the productive dialog we had with Kliplev HVAC and Danfoss, which had delivered solutions for several of our processes. We listened closely to both parties, as Danfoss has the know-how and quality products, while Kliplev HVAC has experience with our system.”

The school decided to replace the building’s old valves with the new Dynamic Valve™, which compensates the usual but problematic pressure fluctuations. It is a simple and valuable alternative to replacing all current balancing valves with new models with an increased maximum flow, which then would require new manual hydronic balancing for the new loads. With the Dynamic Valve™, Sønderborg State School now has even heat distribution with a matching adjusted flow. The valves ensure a constant flow, regardless of the differential pressure over the valve.

As Morten Kanne-Hansen explains, the replacement was made for both financial and comfort reasons: “The replacement was part of a larger process in which the primary goal was to save energy and money.” Calculations from Danfoss show that the school is able to save resources on a more efficient night temperature reduction and cover the cost of the investment in under seven years. If the school requires a temperature of 21°C and is in use for 12 hours a day, this means they can get by with a room temperature of 17°C for about 65% of the time. The school can save about 5% for every three degrees the room temperature is lowered.

Easy to get started

Kim Henriksen from Kliplev HVAC was hired to install and adjust the new Dynamic Valves™. He had previously carried out work at the school when there were problems, but the solutions were usually temporary measures for local problems. Kim was very interested in a solution that involved changing the valves: “I’ve been a big advocate for us being able to take control of the water balance, and I was a happy man when the process was initiated.”

A total of 129 valves have been replaced at the school. Four employees from Kliplev HVAC were in charge of the installation, which was carried out on a long and dedicated Saturday of work. In this way, they were able to avoid disrupting the school’s students and staff. The hydronic balancing is a manageable task, and Kim+ Henriksen is excited about the characteristics of the valve and working with it: “It’s ideal for the challenges of the school. The system is so old that it’s impossible to make sense of how it is built up, and nobody knows where the balancing valves go. We’ve solved this problem with the Dynamic Valve™, which is easy to replace and adjust. So, if you’re having trouble controlling the heat in a large building, this is a solution that literally provides peace of mind.”

The initial results For Morten, the valve replacement process is part of a longterm mission to save energy. It is one of several significant improvements to be made at the school. Among the other projects are the replacement of pumps and the installation of natural ventilation, and the initial results will therefore be seen in light of the other initiatives. As Morten explains, “There are many factors to keep in mind. We have to assess a project like this over time, and any fluctuations will have to be corrected. But it’s clear that the level of comfort has been improved in certain areas of the building, where the valve is part of the solutions we’ve made.” Morten therefore has no doubt about his recommendation for other schools and bigger buildings: “Here we have an area where you can easily do something to optimize your energy consumption. I can’t come up with an excuse for not doing it.”