A stronger environmental profile and energy savings of approx. 30% from a cooling solution that can be expanded as needed. These are the results so far for Danish organic food company Aarstiderne. Since Q1 2018, the company's facilities at Barritskov, Denmark, have relied on a CO₂ cooling system with Danfoss components delivered by refrigeration installer company JF Køleteknik A/S.

For around 20 years, Danish company Aarstiderne has sold organic foods on a subscription basis, offering door-to-door delivery to consumer and business customers all over Denmark.

The food is delivered in distinctive wooden crates, and during busy periods, Aarstiderne delivers up to 40,000 such crates a week from its facilities at the manor Barritskov. This is also where the food arrives from producers and is packed into the crates for delivery.

This business model has been a success at Aarstiderne. From 2013 to 2017, the company doubled its turnover without compromising on values such as quality, growth, and organic production. Caring for the environment and utilizing natural resources fully is part of Aarstiderne's DNA, and the company continuously works to become better at caring for people and the environment, for example through carbon accounting. 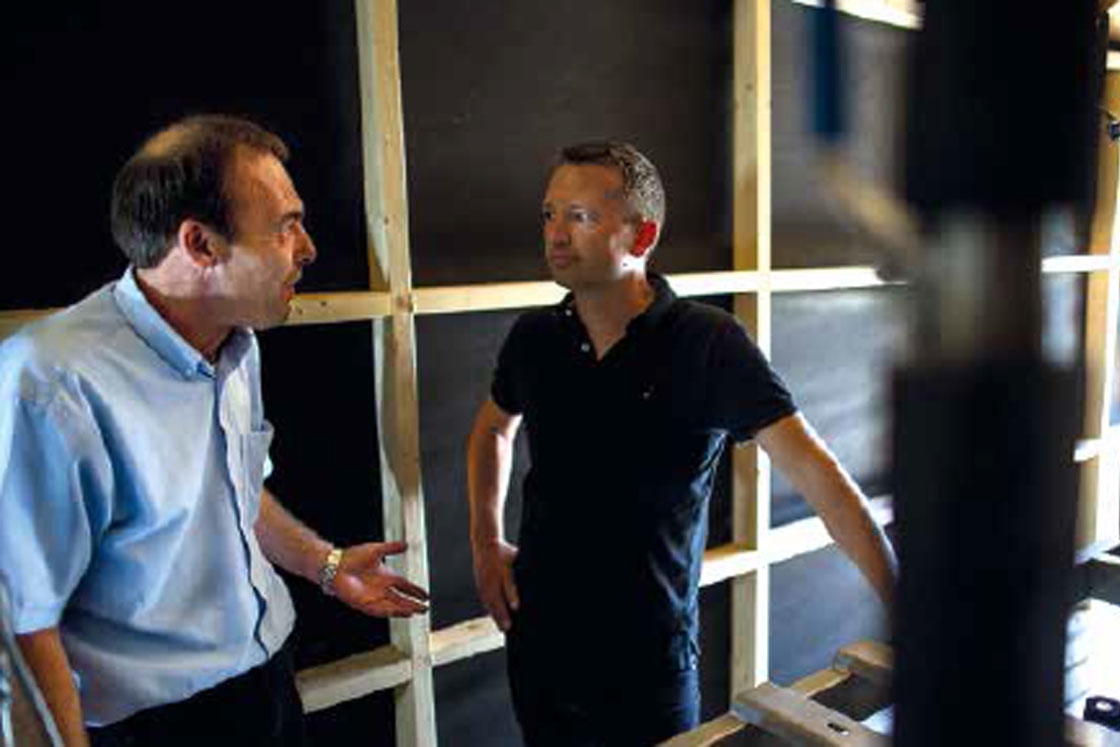 Morten Hansen and Thomas Slott in front of the heart of the CO₂ system.

To me, the environmental and financial considerations go hand in hand. And it has worked perfectly. It’s a real win-win situation!

Searching for an efficient and climate-friendly cooling solution

Aarstiderne has always pursued a sustainable growth strategy. "We have always expanded step by step to ensure that investments have followed growth," explains COO/CFO Thomas Slott. One result of this step by step growth is that stores and production rooms at Barritskov are equipped with several standalone cooling systems.

When Aarstiderne was gearing up to expand in 2017 and needed a new cooling system, the company worked with local refrigeration installer company JF Køleteknik A/S, specifying a cooling system that would fulfill the very diverse cooling needs at Barritskov while using CO₂ as a refrigerant, unlike the company’s existing HFC cooling systems.

"Our success criteria were to get a future-proof system that we could expand while also getting rid of some of our old, standalone HFC systems so that we could reduce our energy consumption and reduce our carbon footprint," says Thomas Slott. "We wanted a solution that produces fewer emissions and protects the environment. That aligns perfectly with our philosophy, and of course, our investments need to reflect that. And that is why the CO₂ system entered the picture".

Major energy and carbon savings from a flexible solution

JF Køleteknik A/S developed a CO₂ cooling solution that was installed and commissioned in Q1, 2018.

The transition from HFC to CO₂ as a refrigerant significantly reduces Aarstiderne's carbon footprint. "With the cooling capacity we've installed so far, we have removed 40 kilos of HFC which has an average GWP of 3,500", says Morten Hansen, owner of JF Køleteknik A/S. "Those 40 kilos multiplied by 3,500 are the potential CO₂ emissions that we've removed. By comparison, we now have 200 kilos of CO₂ which has a GWP of 1. Also, the CO₂ that we're using is actually purified waste gas from gas burners, boilers, and so on, so we're using gas that would have ended up in the atmosphere anyway!" Thomas Slott adds, "I'm looking forward to doing the carbon accounts for 2018 in a year’s time. We will see a significant improvement".

Even though the new CO₂ cooling system at Barritskov has only been in operation for a short time, it is clear that the operating costs will be significantly lower than with the old solutions. "Given the figures, we've seen so far,
I predict that the operational energy savings will amount to at least 30%," says Morten Hansen.

Components and support from Danfoss

The solution from JF Køleteknik A/S includes several Danfoss components, from valves to controllers. The heart of the system is the AK-PC 782A controller which was developed by Danfoss specifically for controlling compressors and condensers in transcritical CO₂ systems. The solution makes it possible to manage all compressors and regulation using only one controller whereas in the past it would have been necessary to use two: one for medium temperature, one for low temperature. This results in improved communication with the system when JF Køleteknik A/S or Aarstiderne log on over the Internet to check the current status.

Morten Hansen is satisfied with the performance of the Danfoss components but also emphasizes that dialogue and support are important reasons why he chose Danfoss. As CO₂ solutions have become increasingly widespread, and competition intensifies, component prices have dropped dramatically in the market. To Morten Hansen, however, that is not the most important aspect. "The possibilities for documentation and technical support that I have with Danfoss make the difference to me," he says. "I find Danfoss to be very responsive when we make constructive suggestions. I haven't seen that with other vendors that we've used". 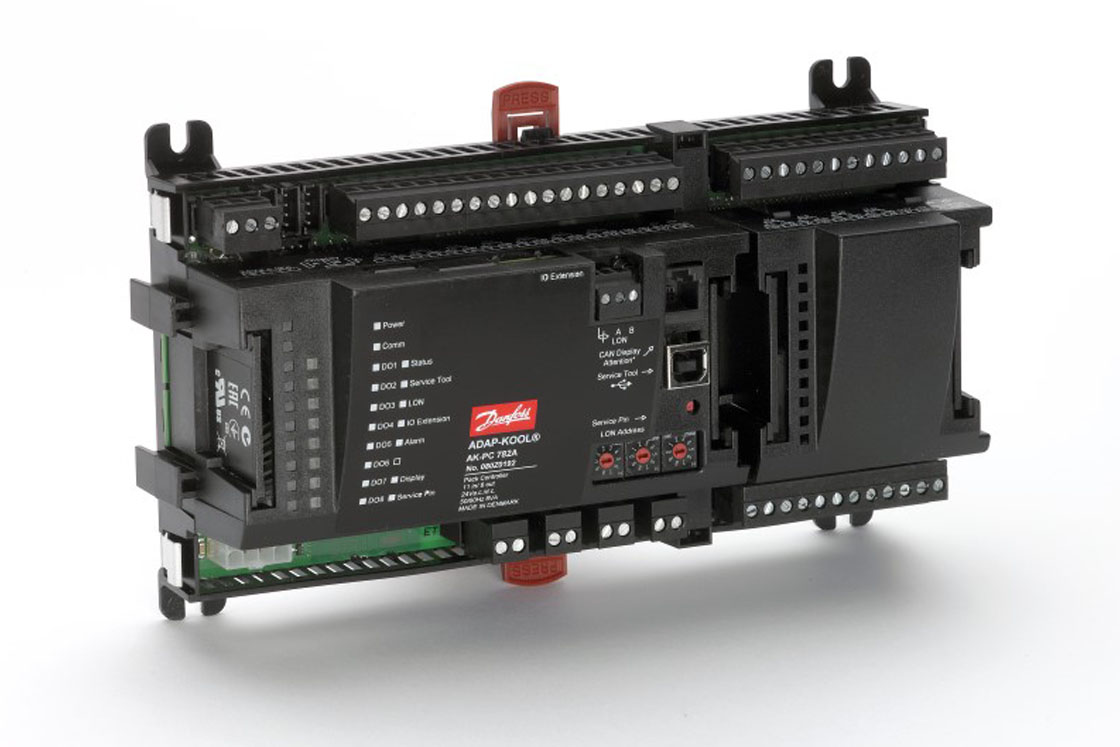 The AK-PC 782A controller was developed specifically for controlling compressors and condensers in transcritical CO₂ systems.

Despite five years of constant growth, Aarstiderne does not take its success for granted. Organic growth with the possibility to expand or contract as needed is key, and the future-proof solution from JF Køleteknik A/S fully supports this philosophy. Morten Hansen and Thomas Slott are both satisfied with the performance of the system and emphasise that it makes a difference for the climate as well as the operating costs at Aarstiderne.

"It's been a great process", says Morten Hansen. "The most important thing is that we've created something where we can safely say that we're doing something right for the environment while also creating a sound business case for the people using the system". Thomas Slott agrees. "To me, the environmental and financial considerations go hand in hand", he concludes. "And it has worked perfectly. It's a real win-win situation!"