How to comply with new regulation for exhaust gas

Emissions from international shipping activities may have serious consequences for human beings and the natural environment. It is estimated that air pollution from marine activities alone accounts for up to 50,000 premature deaths every year in Europe.

For the last 60 years, IMO has been working on reducing the harmful emissions from shipping. In 1997 the MARPOL Convention was adopted to deal with air pollution. By January 2020, the emission control will be even stricter, when IMO starts enforcing a global limit for sulfur in fuel oil used for marine applications of 0.50% m/m (mass by mass). This will significantly reduce the amount of sulfur oxide emitted from ships to the benefit of people living close to ports and costs.

How to comply with the new regulation

To comply with the new requirements, the shipbuilding industry has several options:

The relatively low price on fuel oil makes it attractive to install an exhaust gas scrubber, and for many shipbuilders, a hybrid scrubber system is likely to be the preferred solution to remove SOx due to its ability to switch between open or closed loop operations depending on the emission requirements at the specific location of the vessel.
When running in closed loop mode, the recirculated scrubber water accumulates particles and sulfur that must be removed. The particles are separated in a hydro cyclone, whereas the sulfur is neutralized by adding an alkaline such as sodium hydroxide via a dosing system.

When to use stainless steel to protect the system

The useful safe limit of carbon steel is approximately 65°C for caustic stress corrosion cracking (CSCC) and corrosion. The recirculated scrubber water can, however, easily reach temperatures above 65°C, and therefore a safer choice would be to use stainless steel. 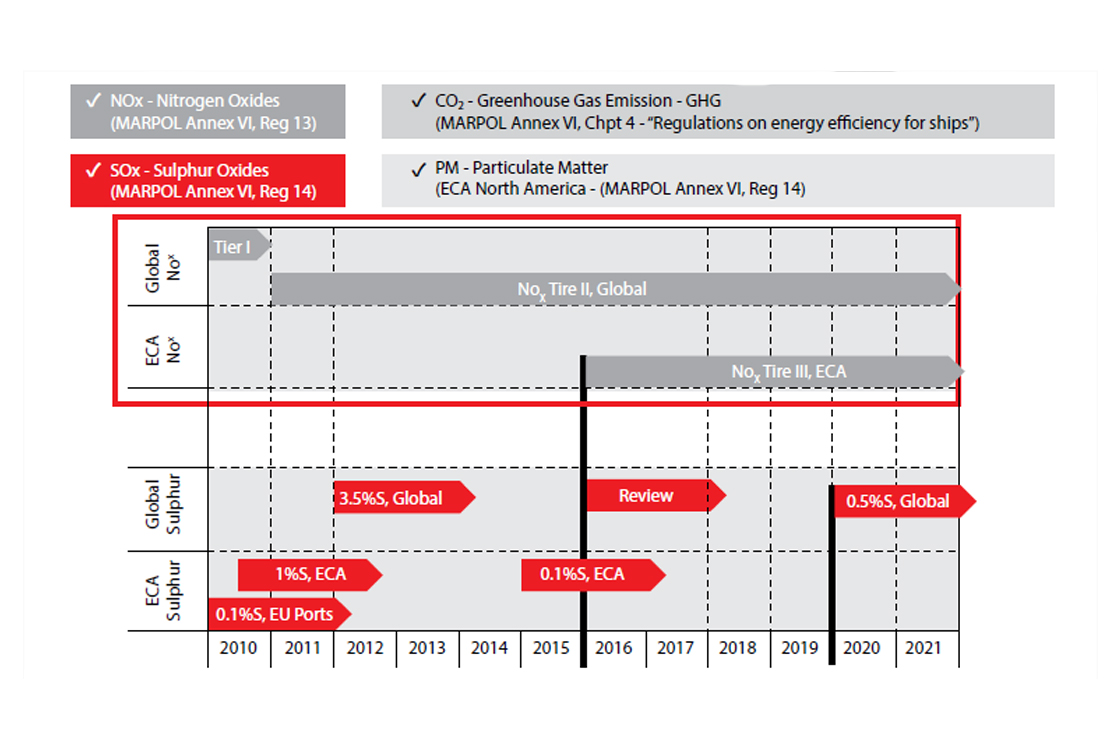 Apart from SOx, nitrous oxides (NOx) are also subject to the IMO Tier III requirements. This means that it is mandatory to install or retrofit equipment/systems to reduce the NOx level to be in compliance with Tier III standards.

The emission of nitrous oxides can either be reduced by Exhaust Gas Recirculation or by Selective Catalytic Reduction (SCR), where Urea or Ammonia is sprayed into the exhaust gas before the gas passes through a catalyst. Due to the corrosive nature of ammonia and urea, all components of the dosing system should be either coated or made of stainless steel.

By January 2020, new limits on sulfur content in fuel oil come into force. This article explores the challenge of sulfur emissions and potential solutions to comply with the new regulation.